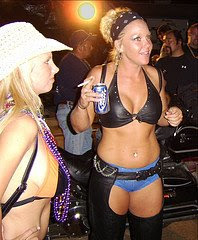 Tongues first wagged over Foreign Affairs Minister Maxime Bernier's striking companion at last summer's cabinet swearing-in, and Parliament Hill is buzzing anew with revelations she was once married to an outlaw biker and lived with another gangster murdered during a bloody turf war in the 1990s.

The divorced Bernier, 45, first began dating former model and aspiring actress Julie Couillard, 38, during the summer of 2007, and the pair caused a minor furor with her revealing attire at last August's cabinet ceremony.

(PS. This would have been a far better story if Maxime Bernier had been, as I have always thought, a woman)

He, married, showed up for cabinet swearing in ceremony with two boobs on a stick that wasn't his wife, and apparently wasn't even his steady girlfriend. It was tacky as all hell and showed a serious lack of judgment that is becoming more apparent with this story.

The libertarian wing of the CPC seems to dig him; I suspect he is a Quebec style libertine, rather than an economic one, if you know what I mean *cough* swinger clubs *cough*.

Still, his peccadillos and choice of companionship don't come close to matching those of his Liberal predecessor Bill Graham, who was a walking national security hazard.

Actually, Bernier is divorced. Anyway, we haven't had a scuzzy scandal in Ottawa for oh so long - LOL - poor Harper and his precious image LOL

He was married when he was sworn in; his present marital status is not germane to the discussion. Your know that.

I love it when female bloggers exude such mature, intelligent commentary, it really reflects well on them at a time when their ability to discuss politics in an adult manner is under question. Keep up the good work Sandy.

I suspect he is a Quebec style libertine, rather than an economic one, if you know what I mean *cough* swinger clubs *cough*.

No, we don't. But obviously you do. I hope you're wearing rubber gloves and a face mask while you type, like the public health nurse told you that you are required to, by law, Neil.

Anyway, these stories only make me like Bernier more. Too bad, like all Conservatives, he's just too stupid to be an elected official.

If you do not know by now, fakebiff is a fraud and a liar.

Whether he posts as biff or fakename, or one of the any number of ID's he goes by, he will lie with abandon, and he especially enjoys the immature insults that are more appropriate for a schoolyard than in an intelligent political discussion.

Your comment had nothing to do with your being a woman of course, but then he has an "issue" with women, which clearly came out in his response.

My advice is you ignore him.

FakeBiff is a different sock-puppet from BiffBiff, not that it really matters since the lies they spew have the exact same relation to reality...none.

FakeBiff's problems with women are, of course, detectable kilometers away. It's sad/creepy/sad.

I bet this is a typical get-together for FakeBiff and friends.

She looks hot, though ;)

Ti-Guy, explain the relevance of linking us to your high school reunion photos.