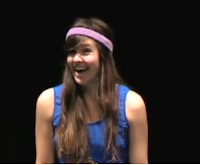 From a Tory blogger whose probably a guy (not that there's anything wrong with that):

Will this affect her career? Yep — but not in the way you might think.

First, you have to note the details for before and after her altercation — the news release, the use of Twitter to communicate her message, the post-event interview. Take all of those, objectively, and you’ll realize that, far from being a light-brained idiot, there’s a planner who know exactly what she was doing, what the consequences would be and how she would handle them. Certainly she had a bit of trouble with her interviewing skills, but if we’re honest, we have to admit: she handled her actions far better than Michael Ignatieff did the 2011 election campaign. It’s that type of go-getter attitude that got her a Loran scholarship in 2007, and probably landed her the Page position to begin with.

There are NGOs out that that could use that kind of planning, and some municipal / provincial politicians could see her value, objectively, as well. Far from snuffing it, Ms. dePape may be clever enough to use this as a springboard for a career in protest politics.

As to the whole question re the "appropriateness" of her actions: remember all that stuff about "contempt of Parliament" that triggered election #41 in the first place?  I can't see how this gal's actions top anything Bev Oda, for example, did in the way of  lowering the reputation of our governing institutions.

And yet Brigette's the one that got fired.

Posted by bigcitylib at 2:35 PM

I think the biggest indicator of how effective DePape's actions were is how virulent the backlash has become. Somehow this former page has offended many people on the right (and some notable PINOs) because she lacked decorum in her action.

To me a silent person with a single message is not only decorous but an iconic illustration of the 'little guy' speaking against the big machine.

Non-Cons don't have a national media to speak for us and the opposition has been largely ineffective in representing the majority of the country.

DePape's faltering delivery during interviews and her reliance on simplistic answers have brought her the wrath of many Cons. To me, she's just a 21-year-old thrust into the spotlight (by herself, granted). Then I think of how the right fetes the idiotic blathering sloganeering of Bachmann, Palin and Duffy and I just sit back and wonder if the right is actually hearing what DePape is saying. Or are they just alarmed that someone has found an alternative way to speak out.

Comparing the incomparable Brigette to the odious one is... contemptable.

She is really beautiful and I admit that even she's from Tory.