The Semiotics Of Stanley The Cat: A Few Notes 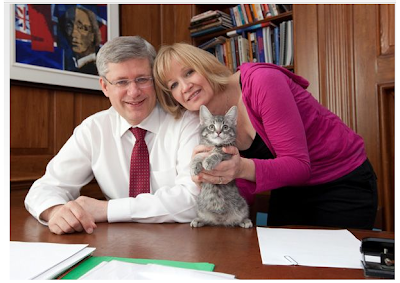 1) For all his "regular guy" posings, the PM treats these casual photo ops very seriously.  In this picture, all his familiar tropes appear:  staplers, folders, papers--the guy works hard, just not on one of them new-fangled computer thingies (and actually, given his age, the PM's formative work experiences would have been PC free, so...nostalgia?).  What I find interesting is the (cheap?) print of John A. over his right shoulder, which evokes the old campaign poster: The old flag.  The old policy.  The old leader.  Thus far, Harper has steered away from invoking the ghosts of Tories past, and its actually served him well. In contrast, where has the LPoC's "Party of Laurier" stuff got them lately?  Its interesting that the PM should make those gestures now, and who he should choose.  Although perhaps not surprising: name a Tory Prime Minister other than Mulroney, and you wouldn't use Mulroney for obvious reasons.

2) That cat is dead, IMHO, and has been stuffed.  A real cat would never look that stiff. Unless its been hanging around with the PM for awhile.  So who knows?  If I'm wrong give it six months and Stanley will wind up in the Senate.  Because breathing is a necessary qualification for being a Tory Senator.  I think.  Although I wasn't getting too many indications from sentience out of David Tkachuk the other night.

Picture is from here.

Posted by bigcitylib at 6:27 AM

Why is lurleen dressed up like a cast member from desperate housewives who just got out of bed?

Ohohohoh loooooooook at uuuuuus weeeee're makin' our cat stand up on it's hind legs on the desk in front of the awful artwork in the yucky frame on the "office" wall. Oooooooh hooooo how sub - suburban are weeeee? Yig.

Stanley, eh? I figger he shoulda named the little feller Climate Change. Then, he could tell everybuddy he cares about Climate Change without lyin'.

The cat looks afraid that it's going to get in trouble later for being up on the desk.

Whatever happened to this guy? One photo-op and then never seen afterwards.

Honestly i like your pussy can I touch it?