Well, maybe not; Aussie Denier Jimi Bostock may be enmeshed in a personal fantasy. He is nevertheless the first blogger to hint at inside knowledge of the CRU Hack (which precipitated Climategate, for anyone's who has been on Mars the past couple of months).

Here he writes of the days preceding the hack:

So, we needed to get to work and, across the globe, people like me downed their tools of their normal jobs and went to proper work. For me, that was selling my web business. On September 1, I commenced work on a campaign I had devised in consultation with others.

Again, details of this will remain confidential (for a number of reasons) but I believe that latter analysis (which I understand to be forthcoming in a number of books) will show that the online campaign against AGW has been the most successful campaigns ever. And I mean this even when not including D-Day. Prior to d-day, it is my contention that we had already beaten down any Copenhagen agreement.

So, at 6.20am (EST) on Nov 17th, 2009, someone who called themselves FOIA posted a simple message on the most renowned AGW believer website, RealClimate. The message was a profoundly moving declaration.

Frank Bi of the International Journal of Inactivism has been doing alot of forensic work with the CRU emails. Take a look at the one of the graphs he has produced: 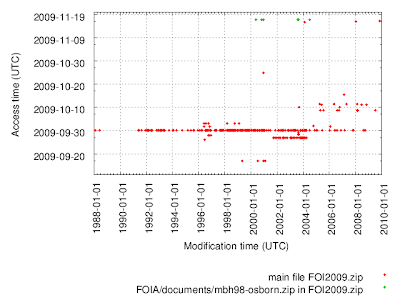 What it shows is that many of the files that finally made it into the final .zip file leaked to the public on November 17th (FOI2009.zip) were either "accessed" or "modified" by the hacker(s) between about September 15th, 2009 and mid-November. And this means of course these files were in the hands of the hacker(s) during that time frame(*).

Which matches up well with the dates Mr. Bostock is peddling for the start of the "campaign" he became involved in. And we know that the U.K. police investigating the crack are looking for ideological extremists. Reading the entirety of Mr. Bostock's post, its pretty clear he fits that bill as well.

(*) A conclusion also arrived at, though perhaps through a slightly different route, by a forensic analysis conducted on behalf of the U.K. Gaurdian. Origonally, it was thought that the hack had taken place in about the third week of November, right in advance of the actual leak date.

Posted by bigcitylib at 6:33 AM

It wasn't a hack, it was an inside job. Get over it.

Here you go. Shooting the messenger again. Phil Jones has said that there has been NO warming for the last 15 years. He also said his paperwork left a lot to be desired. (the same paperwork that came up with the hockey stick graph that most scientists relied on) And somehow you will blindly believe this guy and his tainted message even though his house is crumbling? Unbelievable.

Prairie Kid - what I find unbelievable is that you think that Dr. Jones claimed that there has been no warming for the last 15 years.

John Cross: ..what I find unbelievable is that you think that Dr. Jones claimed that there has been no warming for the last 15years.


Uh.. pardon me, Mister Cross, but in his interview with BBC Feb. 13, 2010, Dr. Phil Jones acknowledged that there has, in fact, been no statistically significant global increase of temperature since 1995, and, that further, since 2002, there has been a marginal drop in temperature, (-.12C).

No need to appologize.

That is not to say there was no warming, just that it is not enough to call it at the 95% level. Jones says its almost statistically significant, which is to say it might be 94% or 93%. Hardly the same thing and, as most of the other climate scientists have pointed out already, not a retreat from the IPCC position.

And, Jones was referring to the least encompassing official temperature scale in use. When you include polar temperatures and ocean temperatures, the warming is most certainly statistically significant.

My point.. is if you read the interview with an open mind from either side of the discussion, Dr. Jones is fairly honest and direct.

Here's the point, I think.

Man-made global warming appears probable - not certain. And it's based, not upon certainty of statistically reliable data, but from interpretations of our best avialable data.

Which isn't to say it isn't happening at all, you are most correct. But at the same time, it certainly isn't the imminent polar-bear killing, glacier zapping catastophre suggested by boobs like Al Gore.

So, I think we would all do well by embracing our collective ignorance as opposed to pretending to be so certain about things that we aren't certain about at all.

And then acting with prudence in light of that ignorance. Neither ignoring the issue, nor jumping to radical efforts based upon gross exaggerations of the issue.

(Let's ignore the inactivist trolls who just want to ignore the post topic and dump their own talking points.)

For what it's worth, my surmise is that Jimi wasn't directly involved in the crack, but did know that Something Big Was About To Happen. If I were a police officer, I'd probably tag him as a 'person of interest' -- of greater interest than even Paul Dennis.

Phil Jones has said that there has been NO warming for the last 15 years.

Phil Jones has said that there has been no statistically significant warming for the last 15 years.

If you believe that they are equivalent I would encourage you to consult a dictionary. If you see that they are different then an apology is necessary ;)

It happens to all of us - making assumptions based upon our previous understanding which, upon further scrutiny, appears to be flawed.

Splitting hairs by saying that "statistical significance" isn't the same as "no", is pretty lame.

I give full credit to Dr. Jones. Regardless of the "climategate" debacle he may have unwillingly contributed to, his commentary, and, in fairness, the questions put to him are extactly the sorts of discussions that we could do with a little more of from our scientific community and from the press.

It would be very difficult to read that interview and develop an opinion that he's either biased or exagerrating the issue.

And biji.. seems to me that the point PK made was fair - that perhaps "shooting the messenger" while ignoring the larger issue is worthy of some question.

And.. well, I wouldn't exactly call John Cross a "troller" for commenting in response.

Though.. in fairness, clearly I'm just trolling around looking to pick a fight and start an argument completely off topic.

Why the hell didn't that Quebec snowboarder take off his hat during the national anthem anyway?

R.G. Harvie, in his determined ignorance, does not realize that Jones was not speaking English, he was speaking Statistic. And in fairness, you Statisticophones need to realise that most people do not understand Statistic and are not able to differentiate between Statistic and English.

Melikes how Mr Cross causes Mr Harvie to embarrass himself. Well done. This - I must say - is one thing denialists and pseudoskeptics do well.

Dano,
You should know by now that denidiots are incapable of shame and embarrassment. Otherwise, they would have long perished from a fatal dose.

That's all you need to know!

Please, please, enable killfile for this blog. It would help a lot.
Just ask them at their page:
http://userscripts.org/scripts/show/4107

PS, since this is the first mention of a hint of an admission of involvement and is being pointed to from other pages, it might be you've created a honeypot here for the people involved and they'll show up.

Ha Ha, just found your amazing piece of detective work. Amazing Sherlock. Forget that nowhere do I elude to being the hacker, not even in a personal fantasy.

The blog entry was about my VOLUNTEER work, self appointed, that me an a bunch of mates did all to stop you and your ilk getting away wuth the lies.

Do you really truly believe that a hacker would out themseleves in this way.

Here is an idea jerk, try keeping up with the debate on the science and get over that the emails were got at.

AFter all, surely the earth is burning and surely you have no time to waste on some 'delusional' chap like me. :)

No, I don't think you're the cracker, and I made that clear. But it's clear you know Something Big Was About to Happen. Which means someone told you that. Who?

If things aren't confusing enough for you: check out this and this.

As they say in Latin, "res ipsa loquitur... sed quid in infernos dicit?"

Look dude, you are really getting far too excited.

What I knew what that the science edifice was cracking and there was two clear turning points in that.

No-one, other than the good blogs such as Anthony Watts, Mac, Blackboard, et el, told me anything.

I think you guys are just getting desperate for anything now and a hollywood cops and robbers about hackers is all that you have.

Me think you need to get to work on trying to rebalance the sudden shift. I am a sceptic bud, not a denier. I have no idea what the real science story is. But, I did know that you and your AGW theory was not anywhere near as solid as you (at least allowing to be) clainmed.

SO, there is a tip for you. Get back to teh real debate. I think teh hacker or leaker or whatever is quite irrelevant to anyone other than the police that's job it is to find out what happened. I imagine that they will do that at some stage. I imagine that they are not beating a path to my door.

So, as you have alwasy said to us sceptics, move along now, nothing to see here.

Hey, I have blogged on the whole episode. A bit rambling but funny, if it were not so serious.