It Is The "O"ne: Onion Ring Addresses Supporters

On the afternoon of February 4th, an onion ring, plucked from anonymity at a Swiss Chalet in Etobicoke (eh-TOE-bih-coh), Ontario, became more popular on Facebook than Canadian Prime Minister Stephen Harper. In barely more than a day, 35,000 Canadians spoke out, and their voice conveyed one message: we would rather be governed by a loop of battered & sauteed onion.

On Thursday afternoon the onion ring spoke to supporters on Parliament Hill. 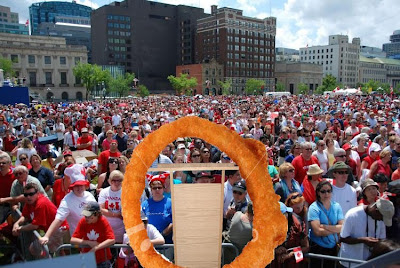 Now, you're reading this here because MSM coverage of the event was scandalously poor. And since I'm writing it up for no money, you're not getting a full transcript. Fuck that. But, in brief, the onion ring has demanded Stephen Harper's resignation, and has offered to assume the Prime Ministership in his place. In a most magnanimous gesture, the onion ring attempted to reach out to Canadians who can't condone or have a moral objection to or simply don't like onion rings. It has agreed to participate in a coalition government with several other popular fast food items, a coalition of the grilling, if you will, although the French Fries are willing to be served au souvęreignist.

With help from Imp and artist friends.

Posted by bigcitylib at 6:09 AM

You're on a roll!

I was at that rally! I'm the one wearing the shades and holding a beer about 47 rows back. Really is an amazing speaker, and you feel a warm, golden aura when you
are around the onion ring too - hard to describe.

Great pic, which I stole. But, y'know? It looks like a Support Our Troops rally.

Dawg, are you criticizing the Onion Ring? Why do you hate our troops?

I'm surprised that no one has pointed out that Michael Ignatieff has few fans than Harper... So really the onion ring is more popular than both of them