Most of his riding association quits. 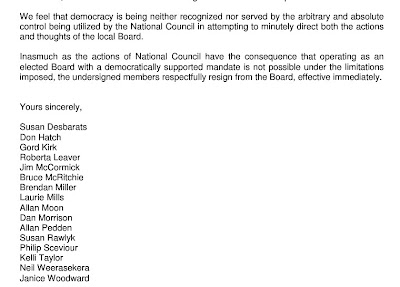 Posted by bigcitylib at 4:01 PM

Yeah but so what. They'll still vote for him and won't campaign for anyone else.

Still, there's a long-festering story here that's been begging to come out...

At least, I hope so. I can't imagine why Harper needs to hold onto Rob Anders.

Ti-Guy, I have it from someone nameless that the two of them have secrets from long ago and if Anders goes down so does Harper.

I doubt anyone could disprove that.

I have it from someone nameless that the two of them have secrets...

Everyone has that. I'm just surprised nothing specific has come out after all these years.

This is why we need the Liberals in charge again. They babble and tattle at the first cross-eyed look. ;)

I think this is much a more significant matter due to the location. We are talking about Alberta here - where you're guaranteed to win if you are the Conservative candidate. The local riding association nomination battles are often more important than the actual election.

If almost the entire riding association goes, that could spell big trouble for Anders. They are more than likely organized and in communication with each other. They can always throw their support and resources behind an independent conservative candidate in the next election ...which would be very fun to watch. :)

And it would be irresponsible not to speculate...

If an Alberta Conservative riding association falls in the forest and no one looks around from their whining about the NEP (yes, that NEP...yes, by people that weren't BORN when it was around. HanNEPibal is at the gate!11!!!) does it make a sound?

Calgary is the epitome of "who they gonna vote for other than us? run a muffin in that riding!) I should know. I have Prentice. He used to have more to him...or so I thought, but now?

For 99.99 percent of the ridings provincially and federally in Alberta, everyone knows that the real election is at the riding nomination meeting for the Conservatives.

I wish I had authoritarian followers indulging my every inconsistent demand. I've never been able to maintain the earnest threat posture required to intimidate them into respect. Something about me breaking into spates of "oh come ON, you're not buying this bs are you???" That's where people like Anders have it all over me.

vw: ousling. a verb and a noun. like quisling, only in the act of being ousted.

Anders has had many "issues" in his riding association going back over the years. I've heard about them since residing there from 1999 to 2007... It is a riding that is resoundingly Conservative, being the most affluent riding in Alberta. Most of Alberta's Big Oil money (the Canadian ones, anyway) reside there (Elbow Valley, The Slopes, etc.).

The issues have been far reaching. If you're conservative/Conservative, how can you possibly lose? You might be secretly a person who had a Liberal history. Or... you might have been involved in some sort of overt activity of a sexual orientation not agreeable to a majority of your typical party supporters, perhaps in a "club" in some foreign country... Or, you simply could be a pompous, arrogant little prick who pisses people off...

Not sure what turns Ander's crank, however, if he has something on Harper, let's embrace him. These guys DO have a history. Anyone whose been around the "Calgary Cartel" can tell you that... Wonder what it will be?

This little resignation of riding assn. members is nothing. They'll be replaced.

There was that one riding near Edmonton last time that nearly went to the Independent after the riding association was pissed that Tim Uppal came in at the last minute and took the nomination. They thought it was unfair the way he did it but the party backed him.

Anders, on the other hand, has been protected from any serious challenges almost from the day he got the nomination.

I don't understand why, but it can't just be because he has something on Harper. His coddling predates Harper's government or leadership.

"...the central party committee is more fearful of the consequences of any nomination campaign that Anders would lead...".

Ladies and gentlemen we have a winner.

I think that's almost certainly it.

Along with those old assignations.

The Harperites have a "central party committee"? A CPC of the CCP?

The Harperites have a "central party committee"? A CPC of the CCP?

That would be the Central Committee of the Conservative Party,
Abbreviated: CCCP

Well Harper’s always had some sort of personal fascination with Josef Stalin (not joking) so this just confirms it. Well, as if all his centralization of power within the CPoC and the PMO didn’t already show a hint of that.

Anders, on the other hand, has been protected from any serious challenges almost from the day he got the nomination. - CfSR

There have been no serious challeges ever to Anders. And far from being protected, Harper clamped down on Anders hard as soon as the federal Convervatives took power.

The only challenge that is relevant is what the voter thinks, and it that sense, Anders delivers the goods. He is perfectly in sync with the majority of the voters in his riding.

Yes, another Conservative could likely win in that riding, but any attempt to usurp Anders would also damage any future Conservative's prospects.

Quite a few people have attempted to take down Anders. Political animal that Anders is, he has delivered a TKO to them all.