The Conservative foreign affairs minister demanded — and got — gold embossing on his business cards shortly after being shuffled into the portfolio last May, contrary to government rules.

Baird then ordered the word "Canada" dropped from the standard design, also against federal policy.

And he insisted that "Lester B. Pearson Building" be removed from the standard street address for Foreign Affairs' headquarters in Ottawa, thereby erasing the name of a former Liberal prime minister and Nobel Peace Prize winner.

And a bowl of smarties every morning in his office, but no black smarties!  And a blue seat cushion for his seat in the HOC, not the regular green seat cushion, because green makes his butt look big.  And a pitcher of water for whenever he addresses the House, cooled to 5 degrees below room temperature, as measured in Centigrade.  Not Celsius...Centrigrade.  And not the caffienated plonk from Tim's at cabinet meetings.  Just the superior gay coffee from Satanbucks.  Fuck the plebes.  They won't see him drinking it.  And who else are they going to vote for anyway? 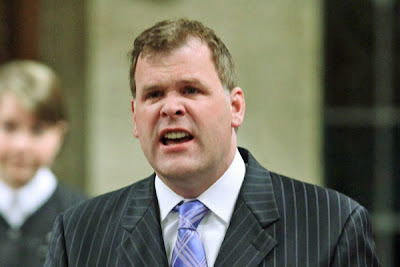 The Minister performs ﻿La donna è mobile(*) from Rigoletto
(*) My Italian is a bit rusty, but I think this translates as "Donna is Easy" or "That Donna, She Gets Around".  And rigoletto is some kind of noodle, I think.

Crazy as it comes..anything goes..who in hell does he think he is?

I guess Baird feels he's entitled to his entitlements.

Gold embossing on a business card? I'm sure he wanted it to be bone white too. <--- One of the few scenes worth watching from American Psycho.

What's a minister in Harper's government supposed to do with their time? It's not like he allows them to actually do any ministerial policy themselves.

So they really are like little Queens, titular heads of their Royal Canadian Ministries. All they really have control over is protocol.