What's Wrong With This Picture?

Certainly not Talia herself, obviously: 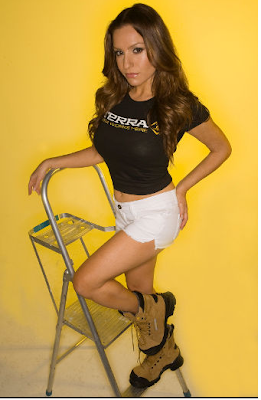 Rather, its the footwear and what's on the t-shirt.  From the Sun Family Blog:

Today's Girl was wearing a T-shirt with big logo across the front. The caption actually mentioned the brand of boots she was wearing which (surprise!) was the same brand as the t-shirt logo. And look! By sheer coincidence, right next to the Girl, there's a half-page ad for the exact same brand of boots.

Back in 2000, I spoke with two managers and one vice-president at the Sun: if an advertiser wanted to use the Girl to (subtlety) promote its interests, (e.g. wear a t-shirt with their logo on it), it should cost at least $10,000, with the girl getting $1,000. The Sun folks just laughed and said they would never sell the Girl.

Here's the website of the company to whom the girl was sold, the company that's sullied the purity of the Sunshine Girl page with filthy lucre.  I would point out, though, that of all the shots in Talia's Sunshine Girl portfolio, this is the only one that shows her anomalously clad.  I feel she perhaps is the victim in all this.