Rob Shows Tim How Its Done 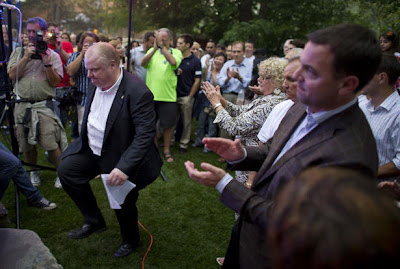 I'm not quite sure what it is he's showing him, but Tim is clapping, so I guess Rob must doing it well.  Also, a nice line from the source story:

...the Star has learned of polling data showing Ford’s popularity steadily sinking from an almost 70 per cent approval rating after the Oct. 25 election to only 45 per cent in early August.

Also, Mr. Ford did not ask Mr. Hudak about the latter's threat to suspend the uploading of services to Ontario's municipalities.  A bit odd, that, as it will likely cost the city a good  $170 million.

Posted by bigcitylib at 7:17 AM

Adio shoes are a cutting-edge favoriteTory Burch Flip Flops among the skateboarding community, offering styles for men and women. But even if you're not a skater, you'll want to check out this line, as their street savvy styling makes for one great lookingTory Burch Bootssneaker. Their sandals are top-flight, as well. Sandals, skateboarding and athletic shoes for men, women and kids - plus some snowboarding styles. Athletic, Skate, Surf, SnowIn spite of theTory Burch shoes fact that Reebok shoes became a household name when they introduced the first athletic aerobic shoe designed Christian Louboutin Shoesespecially for women in 1982; they've been a favorite among men and male athletes for over a century. Reebok shoes are built with comfort and athletics in mind, Christian Louboutin Shoesbut are designed in styles mainstream enough that they've become a staple in casual men's footwear. In no particular order, these are my top picks in men's casual Reebok shoes.