Suck On It, Ez 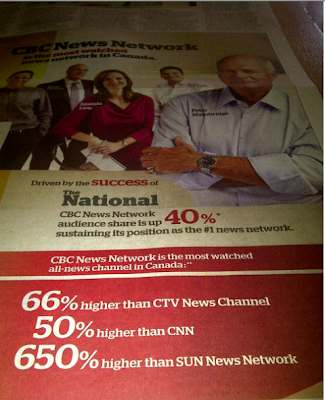 Posted by bigcitylib at 6:09 PM

Facts have a CBC bias.

Michael said...
This comment has been removed by the author.
7:54 PM

During the afternoon and in prime time, Sun News programming bested the state broadcaster's News Network by more than 30,000 viewers. CTV News Channel was a distant third.

While Canada Live - guest-hosted by Anita Sharma - reached 72,900 viewers, according to BBM ratings data, the CBC's afternoon programming only had an audience of 37,900. CTV logged 34,000 viewers during the same coveted 3-5 p.m. timeslot.

These early ratings wins come at a time when Sun News is only available in about 5.5 million households, compared with CBC News Network in 10.6 million homes and CTV in 8.5 million.

"What makes these numbers truly impressive is that we don't receive over a billion dollars in taxpayer support to make it happen," said Sun News spokesman Luc Lavoie.

BTW captcha had "Ezras" up there. Cute. :D

That was one day. You're extrapolating data from one day of viewing, while the next day all of them, including Adler and Lilley, dropped far below 20K?

You have now proven how the Conservatives got their majority - by making facts irrelevant. Good job.