When I say that Caddy is the nation's best cryptid, I don't necessarily mean that its the best known (that would probably be  Bigfoot, although Ogopogo might give our big monkey man a run for his money).  What I mean is that its existence has been best established.  You see, back in 1937,  on a flensing platform at the whaling station in Naden harbour, Haida Gwaii, a large serpentine carcass was pulled from the belly of a sperm whale.  Several pictures were taken of it, including the one below: 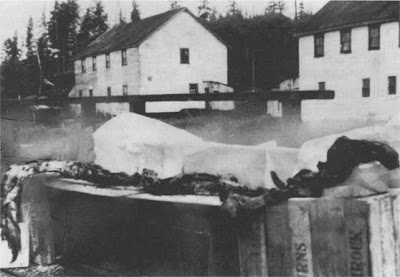 Although the carcass was lost, these photos have inspired a fair bit of rigorous scientific thinking about the nature of the animal pictured for, while there have been recent alleged sightings, the video "evidence" produced in support of these have been disappointing at best.  This old post from Darren Naish summarizes the available research, and includes the wonderful speculative sketch of the beast below: 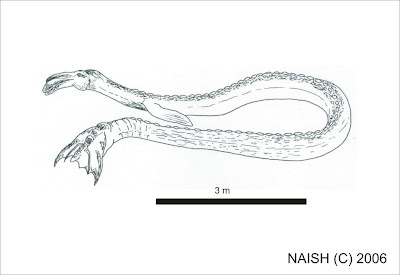 Now, a word about Darren Naish.  Along with Loren Coleman, he is modern Cryptozoology's best friend--a real paleontologist who has stooped to take an interest in the unidentified animals that swim in our oceans and roam our forests.  For instance, he has argued that the existence of "sea monsters" is really quite likely, if this term is interpreted to mean some hitherto unknown species of long-necked pinniped.  He has even pointed out that descriptions of such an animal exist in the scientific literature from several centuries ago ( Parsons: A dissertation upon the Class of the Phocae Marinae): 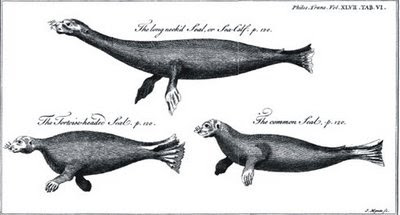 Well, a key piece of the Caddy legend is the 1968 report by one Captain William Hagelundto the effect that he had captured (and then released) a baby cadborosaur.  Darren thinks he has I.D.ed the baby Caddy, and is publishing paper on the topic entitled ‘A baby sea-serpent no more: reinterpreting Hagelund’s juvenile “cadborosaur” report’.  Alas!  I fear he is right.  You can read the whole argument through the link, but the picture below kind of sums it up:

A bay pipefish?﻿  Its kind of like a sea-horse.  Now, it doesn't explain the adult Caddy, though a few have argued for the existance of some unknown species of gigantic pipefish as being the best explanation, generically speaking, for a number of sea serpents report.  But it does seem a good explanation of this particular incident.