After the CRU-Hack and other pseudo-scandals of 2009, Berkeley physicist Richard Muller assembled a team of scientists and statisticians whose goal was to reanalyze land temperature records and determine once and for all whether factors such as the Urban Heat Island effect or the poor siting of surface stations had any discernible effect the long-term temperature increases that scientists have recorded in the U.S. and around the globe.  In other words, they set out to determine whether the Earth was warming, or just our thermometers.  Guess what?  Its the Earth.

From their paper, Influence of Urban Heating on the Global Temperature Land Average Using Rural Sites Identified from MODIS Classifications: 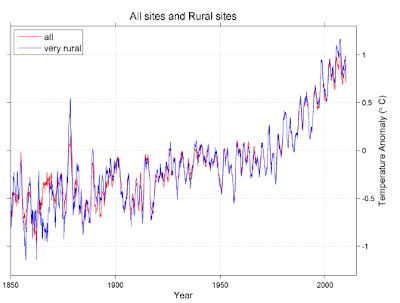 As the captions indicate, this figure shows temperature readings for all stations versus a rural subset where the UHI effect should be absent.  Had these two lines diverged significantly, this might have indicated scientists were mistakenly attributing temperature increases caused by UHIs to Global Warming.  But they are almost identical.

From their paper, Earth Atmospheric Land Surface Temperature and Station Quality in the United States:

So there you have it.  Now, its worth pointing out that these studies were in effect funded by the infamous Koch brothers, and that Mr. Muller has made some rather sceptical, indeed intemperate remarks about Climate Science while at the same time displaying a very imperfect grasp of its tenets.  But all that can be forgiven.  In fact may add to the credibility of his project, at least in the eyes of the media.  What is somewhat more disturbing is that Mr. Muller is getting tons of headlines for work that really just confirms what climatologists already knew years ago.  For example, Anthony Watt's complaints about poorly placed (next to heat sources, for example) surface stations were answered back in 2007.

Jon Dursi said...
This comment has been removed by the author.
8:31 AM

I just want to point out for a second how unsurprising the result itself is.

For the recent surface temperature measurements to measurably diverge from what we thought they were would have been monumentally baffling, because it would have been squarely at odds with dozens of other data sets. Frankly, if someone did find the land surface temperature measurements differed significantly from previous reconstructions -- higher or lower -- the first and most reasonable reaction would be to simply conclude that they had made a mistake.

The denialists like to pretend that scientific conclusions hinge crucially on one obscure fact, and if only that can be brought into disrepute, the whole conclusion changes. But that's completely wrong. No one would - or does - accept any conclusion that was based on only one piece of information. It's all based on multiple independant, interlocking paths of investigation.

Not, unfortunately, that this will change too many deniers' minds.

Having said that, the BEST team is to be commended for doing the extremely important, but incredibly tedious and unglamourous work of bringing a huge number of data sets together into a single coherent whole; the resulting dataset will be useful for a variety of purposes.

Dan Johnson said...
This comment has been removed by the author.
10:56 AM

It's great to see that people take the time to do such detailed work, even when it was unlikely (based on all previous studies) to really be of much consequence. Now watch the deniers carry on claiming their "theories" trump the data and the analysis. The friends of anti-science and others might have to get a new set of armchairs to devote to a counter study. dan.johnson@uleth.ca

Another example of the importance of understanding the basic science behind things so that you don't end up reinventing the wheel over and over again.

The Building Services CPD Assocaition at http://www.buildingservicescpd.org hold regular training seminars to discuss similar issues. In 2011, air-conditioning in the UK consumed some 48 PJ (13.3 TWh) of electricity causing emissions of over 2M tonnes of carbon to the atmosphere. This represents about 7% of all electricity used in non-domestic buildings and 14% of electricity use in such buildings for building services purposes (including lighting).Half of the “cooling” energy is actually consumed by chillers, with a similar used by fans and other ancillary equipment – especially in central systems.
To put this into context, this cooling energy use is less than the equivalent figures for France, Spain or Italy, and two orders of magnitude less than the USA or Japan. Even on a per capita basis, air-conditioning consumption in the USA is around 30 times than of the UK: Japan’s is over 50 times higher.

In 2011, data centres accounted for approximatley 1.5% of the world's total energy consumption. (http://www.datacentredesign.org) However the current trend in the increase in cloud computing will likely reduce the global energy footprint of data centres over the next few years. Cloud computing installations typically have much higher server utilisation levels and infrastructure efficiencies than in-house data centres.