Before Cherniak decided to back S. Dion for Leadership of the Liberal Party, Dion took him out to lunch. There was no causal connection here, obviously, but I was thinking of my own situation. I'm always looking for a free meal.

Except that I'm a political Pariah! I've been denounced by Warren Kinsella twice, as documented here, and alleged to be, on one or another occasion, an anti-Semite, a pedophile, and a cannibal! I doubt any of the candidates would want my endorsement.

On the other hand, it has occurred to me that they might want to make sure that I don't endorse them. I mean, what if I were to don my favorite adult diaper, shave the words "BCL For [Your Candidate's Name Here]" into my extremely hairy chest, and post pics a few days before the Lib convention in December? I could send a link to dear Kate at SDA, and the other major media outlets, and watch a carefully nurtured political career go down the sewer. I can just see the headlines: Alleged Cannibal thinks Iggy is Way Forward For Canada!"

This works especially well for me as, potentially, I get 10 free lunches out of the deal, not just one! Because you can only endorse a single candidate, but you can non-endorse as many as you want!

However, for some of the candidates, a mere meal won't cut it. To secure my non-endorsement, the following candidates are going to have to do more for BigCityLib.

Joe, I'm not asking much. Because I think your issues with fundraising are overblown, and that the other Liberals have been mean to you. You didn't do anything illegal anyhow. And since I know the guys that do your food when you hold stops in Toronto, all I want from you is some of their sweet, sweet fried chicken.

Afterwards, we can go find some kids and shake 'em down for their milk money.

Iggy, Iggy, Iggy! Better find yourself a pink Tutu buddy, because if you don't want my support, your going to have to dance for it! The whole goddamn NutCracker Suite, while I play it on a kazoo! Also: Pheasant! I want to eat pheasant! You're a rich, classy dude. Take me somewhere where they serve Pheasant, and make sure it's bloody good, not too dry or too greasy!

Mr. Brison, I have a couple of special demands, based on your status as the only openly Gay candidate in the race. I mean, for food, you can take me anywhere trendy. Sushi would be nice. Or, have you ever heard of Mr. Pong's on Spadina?

But what I really want is video-tape of you and Svend Robinson doing butt-sex on, just for fun, a pool table! 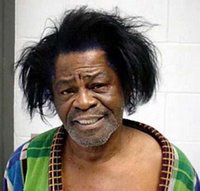 Now, this is just the first part of my list. More demands will assuredly come. So get out your pocket-books, ladies and gentlemen, BigCityLib can be bought, but he ain't cheap.

If I was you I would get iggy to write a lengthy nuanced heart felt defence of .... hmmm... why not Satan?

Im sure he could do a fine and convincing job of it.