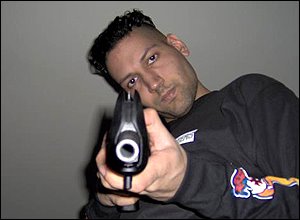 Meet Kimveer Gill, the 25 year old from Laval who went on a shooting spree at Dawson College in Montreal yesterday. Points of interest gleaned from various news sources:

1) Terrorism does not seem to have been involved, and he does not appear to have been motivated by race or ethnic hatred, according to police reports. Last night, a Dawson College student suggested (on CFRB radio) that he had opened fire in a cafeteria known at the College as "The Jew Cafe", but this appears not to have been the case. If anything, Gill appears to be driven by "Goth" ideology. His blog at vampirefreaks.com contains the claim: "Metal and Goth kick ass. Life is a video game, you've got to die sometime." And other statements of a similar ilk. His favorite video game was "Super Columbine Massacre", and he left messages blaming society for not stopping school "bullies".
The blog also has pictures of him posing with various weapons, such as the hand-gun above. Another hypothesis is that he was a former Dawson College student who dropped out or flunked out. This is all from various news sources; I have been unable to find his blog on the vampirefreaks site.

2) The guns he used (three of them) were legally registered, including apparently the hand-gun in the photo. I thought it would be a little more difficult for a 25 year old metal-head to get a hand-gun in Canada, but perhaps not.

3) I almost wish he had been a standard issue white boy, but from the name and picture it is clear that Mr. Gill was one of the "dark skinned races", possibly of Indian or Sri Lanken origin. I hope the "blame Muslims" crowd doesn't get hold of anything out of this case that they can use.

4) Trench coats as a fashion accessory will be out for the next ten years. Pity. I own a couple. They were hard to wear after Columbine too.

That's all so far.

"Life is a video game, you've got to die sometime." That sums it up...we are all victims of Doom.

This is the SECOND time that Vampirefreaks.com has a connection to a murder in Canada during the last 6 months!

In April, a 12 year old girl from Medicine Hat, Alberta and her 21 year old boyfriend (who met on Vampfreaks) killed her family. Here is an update on that murder:

"Accused in triple murder back in court
MEDICINE HAT (CP) - A man accused of murdering three members of a family in southern Alberta made a brief court appearance Thursday.

Matters for Jeremy Steinke, 23, were put over to Oct. 10, when he will make his plea.

Crown prosecutor Stephanie Cleary told court that Steinke's lawyer, Alan Hepner, is out of the country this month. She said details like the length of the trial and scheduling of a preliminary hearing will be discussed at a pre-trial conference on Oct. 5.

On April 23, a 48-year-old woman, her 42-year-old husband and their eight-year-old son were found dead in their Medicine Hat home.

Steinke and the dead couple's 12-year-old daughter have each been charged with three counts of first-degree murder. The case drew national attention when it was learned that the girl and Steinke both had profiles on vampirefreaks.com, a website devoted to goth culture.

A judge-only trial for the girl is scheduled to begin Feb. 12.