SYDNEY, Australia (CNN) -- Steve Irwin, the TV presenter known as the "Crocodile Hunter," has died after being stung by a stingray in a marine accident off Australia's north coast.

Apparently, Mr. Irwin was filming a documentary on "Things that Can Kill you in the Sea" and the sting-ray (which he was not pursuing at the time) nailed him through the heart with its tail barb. He died instantly and without pain.

According to messages posted on the Dinosaur Mailing List, Irwin claimed to fear no animal but for birds. A cockatoo tried to eat his nose once.

And, antics aside (Crikey! That's a beaut!), Mr. Irwin funneled alot of the money he made into conservation efforts. He also did his best to demystify the family Reptilia, BigCityLib's favorite type of animal. 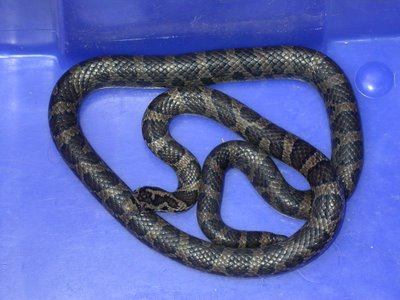 In fact, here's a picture of an Eastern Milk Snake that I found lounging around in front of the office last Spring (and scaring off all the girls on coffee break, I might add). This baby was a good two feet long, and I ended up carrying it around with me for a couple of hours waiting for a guy from the City, thinking it was somebody's escaped pet (Eastern Milk Snakes sell for about $200 in local pet stores). It was so tame, I didn't even need gloves. Finally, the guy arrived and told me Eastern Milk Snakes were actually native to the Don River Valley, though rarely seen. This one had just come out of hibernation, which explained its placid demeanor and the relatively faded coloring. So we released him by the fence and, about two days later, I found a shed skin about a hundred yards away.

So when next time you see a Garter Snake, remember: Animals are innocent; it's people who're Assholes.