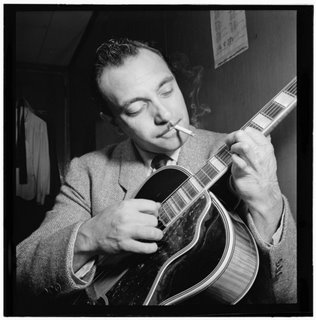 I am not a big Jazz fan, but I am a fan of the guitar, and this film of Gypsy guitar great Django Reinhardt and violinist Stephane Grapelli with their Hot Club of France is one of the coolest things I've seen in awhile. All hail You Tube. If you're wondering why Django (the guy with the mustache) is playing with only two fingers on the frets, it is because the others were burned in a fire and he had to relearn the instrument. One of the rhythm guitar players is his brother Joseph, I believe.

Django Reinhardt is the preeminent pre-rock guitar god (1930s, 40s, and early 50s). His bands invented the lead/rhythm guitair combo, and Jimi Hendrix named his first group "The Band of Gypsys" after this guy. That's how heavy Django's street credibility is with modern guitarists.

Look unto this footage, you wretched young punks of today, with your Bling and 9mms and Crystal Meth! See what COOL was before your generation came along and fucked everything up! Smoking, drinking, wearing nice clothes, playing poker!!! Oh god what you youth are missing!

Posted by bigcitylib at 5:28 AM

You never heard of the hot Jazz Club of Grappelli and Rheinhardt. My boy you have been deprived.
These two guys were the hottest.
Oh yeah guess you don't have Jazz radio in the big TO. So do yer self a favour and listen to CKUA. Online like.
And you too can be a hep cat, man.

No, I've heard him, and I even had a couple of albums a long time ago with the Hot Club. For some reason, his names come up a couple of times in the past week, and I found the footage via a fan site. I've been downloading some of his later, electric stuff.

I thought you'd like this one. (By the way, I didn't know Walker Evans ever did anything on Cuba until I saw it at your site. I'm looking for that book now.

We will have to watch out for the Politically Correct makeover in the future when they use the Stalinist technique of removing the cigarette from his picture.

Sorry about that earlier comment I thought you hadn't heard of Django, and apparently thanks to the joy of Sattelite TV I have discovered T.O has a Jazz FM station.

Discover Limewire and you can download as much Django as you want.