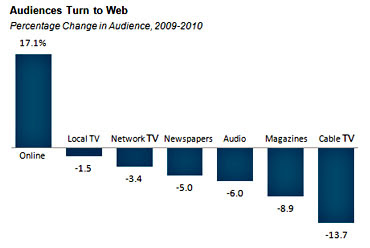 Kevin Drum speculates as to why:

This is interesting. The audience for actual cable news dropped a fair amount, but the audience for prime time blowhardery dropped even more. So the problem isn't that 24/7 news is too boring and needs further injections of attitude, because it turns out that attitude isn't selling as well as it used to.

Posted by bigcitylib at 6:20 AM

Why did Lib blog rush to the aid of the CBC and demostrate a prejudice regarding SunTV news?

Without a single show the left are foaming at the mouth and ignoring the violations and accountability from the CBC regarding their expenses and access to information requests.

Very damaging for credibility from the bloggers in the left.

Ask Harper for the details on the CBC. He knows everything.

Faux News North will probably remind me of American Idol because its shows will not be so much about the "content" but more about the hosts.

It is wise for newspapers to get into television and other media as print media revenues are in decline for each newspaper. For Sun Media, it will be able to gain exposure by offering news-jock radio on television. Faux News North will likely attract an audience that does not currently watch CBC News and CTV NewsNet extensively. It may even get more viewers than the other news channels. However, one will need to watch the advertising to know the kind of audience Faux News North will be attracting. Will there be commercials about investment banking or earning/purchasing "retail" diplomas?

I for one cannot wait. This is a disaster of comedic proportions in the making. The desperation from the right over the impending titanic flop is palpable, as witnessed by the misdirected comment from CS. It's time for comedy gold - unintentional, uninformed and a whole heaping of whining from the perennial victims of the right. Bring it on.