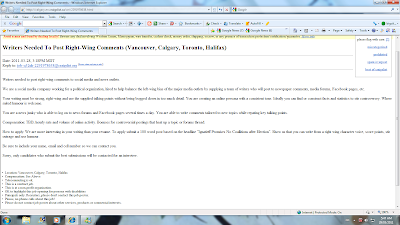 Note that this time they're not telling you its OK to "make up" facts, just "construct" them. Doesn't say though if you're allowed to construct them "out of the whole cloth".

I guess this argues in favour of the ad's being real. Whoever is behind it has still got some issues with spelling, ("repating talking points"), although in the world of social media running your stuff through a checker seems optional.

Interesting that whoever is offering the position seems to operate out of the four regional centers in the ROC: Vancouver, Calgary, Toronto, Halifax. I don't suppose that tells us much about who they might be (presumably not the CPoC itself, at least not directly). H/T to Kady, the o'Malleyest of them all.

Posted by bigcitylib at 6:01 AM

"A conservative charactor voice"?
Very odd phrase makes me think it's just another made up Liberal scandel.

I sent an email to Elections Canada asking them to look into this. If this is not the Conservative Party, then it might be third party advertising.

Ridenraun - you should apply for the position, it's right up your alley.

Sassy, how do you think he came to be here in the first place.

Your link didn't work for me; but there is now an ad up for leftwing writers:

Here it is broken up:

Hmmm, an ad for Leftie-trolls coming from Calgary, that hotbed of Liberal activity. Why would anyone question that?

And you all BELIEVE THIS, do you?

a) is the Economic Action Plan over?
b) if so, why are there signs all over the place?
c) can Harper legitimately refer to the EAP in the campaign as though the taxpayers are not paying for all those signs?
d) can the signs be removed under the Elections Act?

Those signs, after all, and the EAP was promotional material of the then-named Govt. of Canada, not the Con Party. What the heck!?

"And you all BELIEVE THIS, do you?"

"And you all BELIEVE THIS, do you?"


Awww... now this is one of those times when if you can't think of a suitable and devastatingly witty response, you just shouldn't post anything at all.

My natural response (which you would have anticipated if you were even half as clever as you seem to think you are, honey) would of course be this: "yes, like most conservative supporters I'm unintelligent enough to think that posting this on an open forum like Craig's List would go completely unnoticed by my opponents, and not be used immediately against me."

Again, the only thing I can say to such 'reasoning' is...wow.