Cause And Effect, Or: The Revenge Of Susan Delacourt 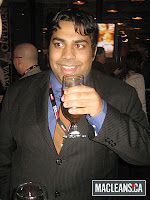 Q. Is it possible that the Conservative source made up this story to make "mischief," as Liberals allege?

A: Yes it is. But our usual practice is to "out" the source if we find out it was a deliberate lie, so stay tuned. Seasoned political people know that you only get to lie once to a reporter

Dimitri Soudas, a PMO spokesperson, said there was no truth to claims made to the Star by Kenney's communications director, Alykhan Velshi, about three Liberal MPs interested in crossing the floor to the Conservatives.

It always looks better if you out yourself. I look forward to Ms. Delacourt's postings for today.

PS. If you are wondering who Alykhan Velshi is, he's like the Conservatives chubby, ethnic version of Kinsella. Feel free to blame any Harper Gov. dirty tricks on him. (I, however, am starting to rather like him. You can see devilry in those eyes.).

Interesting the Ruby Dhalla was targetted - Kenney sure has it in for her.

Is Don Martin a CPC hack? Instead of blaming the CPC for the troubles within Liberal ranks ask those reporters who are writing these stories.
======================
"Bond with caucus. This is a very speculative rumble, but at least one prominent MP has quietly mused to me about crossing the floor to join the Conservatives. Others complain their leader is deaf to their input and trivializes their value. Given that the Conservatives are no longer markedly different from the Liberals in fiscal or social policy, Ignatieff might be more caring of his caucus lest his MPs start looking for another party leader who can do better."- Don Martin

Here is a good example of what your good for nothing Ontario provincial liberals are doing, and why, there is not a hope in hell for the liberal party. After the corrupt bastards, handed out tons of money to their buddies with the e-health scam, they insist on charging loan shark interest to our veterans, who were the victims of a crime.

Harper's bunch sent out a rumour and the inept media fell for it. In otherwords, Harper doesn't like the media - only when he can USE them.

Don Martin, like other journalists want headlines - they need to keep their jobs.

Give your silly head a shake.

Besides, you Con supporters always cry Liberal media bias.....because Harper told you it was so.

So, don't attack those upset with with the lack of journalistic integrity now.

You want more articles where reporters have reported the same?

Simple math, I am not interested in providing additional articles from different dates with different journalists reporting the "musings" of MP's talking about floor crossing.

Is it possible Sandi with your BLINDERS on you overlook those statements as SPIN or bias?

Did Don Martin make that up?

Here is my guess, a "prominent" liberal who may have been unimpressed with Iffy's BC "star candidate" for a justice portifolio.

Funny this comes in a COMMENT SECTION about the floor crossing rumor being COMPLETE BUNK. Nice math indeed.

CS - I do not believe Don Martin made that up. I also do not believe he believed that person was really going to cross the floor. He certainly never alleged the person said that was his plans, hopes or wishes, nor did he say anything about putting any such plan into action.

He merely said this was very speculative, and mentioned someone was "musing" about crossing the floor.

In any event, despite your valiant effort, yet again the facts are not on your side. Clearly the CPC ARE to blame here - and they have admitted it.

It is telling your partisanship goes so far that you will not even accept an admission of guilt from your party.

And as Kady O'Malley has pointed out over at Mclean's, an MP musing about crossing is kind of a regular occurrence with journalists. They only choose to publish the musings when it fits into some other narrative they are trying to push.

I wouldn't go so far as to say this is yet another example of anti-Liberal media bias though because the same thing was being done to Harper when the media decided that was the narrative on Harper in the fall of 2005.

If you recall then, Harper was way down in the polls and Martin was way ahead (both in voter support and leadership numbers), the narrative then was that he had squandered his summer by not getting out there (turns out he was building a policy platform and election strategy that was primed and ready for, but not released before, an election was called), some anonymous Conservatives were speaking to the media about complaints on the leader, lots of griping in the conservative blogs and among pundits. And there were published rumours about fed-up MPs considering crossing the floor. None did at the time.

The harder you deny plausibility the faster it appears to gain traction.

This is another example of how some people look to blame others and cry wolf repeatedly.

Gayle, Steve you really need to look in the mirror and stop blaming others.

In your world it is someone's fault for the problems of the Liberal Party.

Ted nailed it. Reporters are writing articles about floor crossing.

The "CPC" did it and are reponsible is not working with regular voters. The Polls reflect the voters are NOT buying your version of facts on several issues.

Gayle you can spin on behalf of the Liberal Party and pretend what Don Martin meant in his use of the term "musing".

You can also attack Don Martin as a CPC hack.

Plausible vs truth, get used to it!

The Liberals promised to scrap the GST?

MI did suggest he would raise GST if necessary in Kitchener this year?

The Liberals now promise NOT to raise any taxes to slay the deficit?

MI gives a wonderful speech praising taxes and defending their use.

Is it plausible MI will raise taxes if necessary if the economy worsens when he wins enough seats to form a minority in a coalition with the NDP?

Goodluck with denying any plausible story and blame the CPC narrative.

Oh look - CS is trying the change the subject and lying about what people have said again.

Telling that he can never simply deal with what people have actually said.

Telling, also, that he maintains his denial the CPC are making stories up despite the fact they admitted they did so.

CanadianSense said...
This comment has been removed by a blog administrator.
10:35 AM

Yes Gayle, please take the Con apologist, with the massive bias, at face value. Clearly, an objective observer who's advice others should heed.

I voted for the Liberals and never voted for PC ever.

Unlike you, Steve I vote for vs against something!

I voted for the Red Book and their promises.

I also voted for Bob Rae as an alderman and MPP, MP in York South Weston.

Steve you are FREE to belittle us lost liberals as CON apologists.

If it makes you feel better, take a very hard look in the mirror and ask yourself are all those POLLS wrong for months?

A new Narnia AD will fix it!

Please stay away from offering any alternatives in the HOC. Adopt the NDP role of voting against 100% before reading every bill! (Please)

The 22% who want an election and blame HARPER for everything is the majority.

Focus your blame and anger on those who are writing those patently false stories about defections.

Reminds me of those Wafer Liberals who were so quick to jump on that bandwagon.

BTW I disagree on several policies the current gov't has enacted, but the alternative?

Surely you must be joking?

Next time have a convention and let the grassroots pick the leader no more Rosedale gang "picks".

That was convincing. Hit a nerve eh?

Reminds me of those Wafer Liberals who were so quick to jump on that bandwagon.

Are you talking about the time Stephen Harper took a communion host and the fed it to the pigeons outside the Church?

Alykhan Velshi is a fat, neoconservative fat sack of fatty fat and a 5th column traitor who needs to be rendered.

Interesting the Ruby Dhalla was targetted - Kenney sure has it in for her.

Soudas is no saint in the matter. From my post yesterday quoting The Star:

And indeed, Dimitri Soudas, a spokesperson for Prime Minister Stephen Harper, sent out a mass-distributed email yesterday drawing attention to the Liberals' rebuff of Dhalla's bill [to increase old-age benefits to immigrant seniors.]. "They are voting against the (private member's bill) of MP Ruby Dhalla! Their own bill!" Soudas's email said.

This has been another episode of Carnival of Fools.

The media is doing it's best to paint the Liberals as a dysfunctional party...This needs to stop!!

As for the REFCONs, here is my take

Harper and the rest of his cronies have LIED, I repeat LIED to CANADIANS... Using the media to spread their lies is disgusting!

I have yet to see where $50billion Jim is going to get us out of deficit....because he can't!! It will take a LIBERAL government to do this.

When a minister has to read a prepared (sorry sanitized) speech because they can't think on their own, it's disgusting!

Cut Corp taxes and raise personal taxes...Who's going to reduce the deficit? Guess what, we are...Whoo Hoo! I'll have to help pay down a $56 Billion deficit caused by fiscal irresponsibility of the Government of Canada.

And we can't forget abot the coalition (Conservative, Reform, Alliance party aka CRAP)
and now going to bed with the NDP

Please continue to list those reasons to throw out the current government.

The October 14, 2008 General Election already passed judgement on those complaints.

Don't forget to include bodybags and wafers, unsexy comments in your list of complaints.

When reality sets in again take a look at the Polls for the past six months.

Regular voters does not ENOUGH about those issues to punish the government.

PS. Nearly 40% of confirmed opposition voters (each party) don't want an election either.

Isn't the point here - that journalists should be reporting information that is important and not this rumour, gossip crap.

It affects democracy believe it or not. People should be voting on facts, issues not media manipulation, big fat cat image makers and consultants.

Don Martin - look what media he writes in - enough said.

I agree 100% the tabloid media have been bad for a very long time.

I would prefer if the media did not chase and allow each party to divert our eyes from the important issues.

The inside baseball ottawa stuff is not important to majority of Canadians.

Let each political party pay for their own BS. Stop feeding the beast and faux scandals.

Please continue to list those reasons to throw out the current government.

We could be here all day. But a good reason is that this government is infested with little shits like Alykhan Velshi who learned the tricks of the trade at American right wing think tanks, then high-tailed it back to Canada when it was clear that the Bush administration was turning out to be a catastrophe.

I never thought Canada would become the last stand for these cretins. I guess we'll have to blame the Liberals for preventing them from seizing power earlier, which would have seen them go the way of everyone else associated with Bush, Blair and that weird thing from Australia...what was his name again?