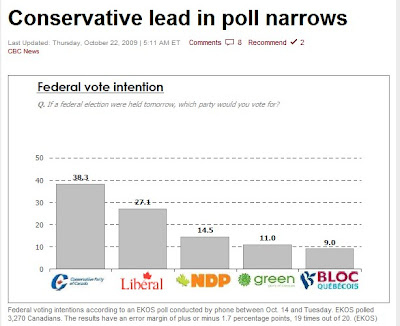 EKOS president Frank Graves said the news of last week was dominated more by the use of Conservative logos on "prop" cheques by MPs at funding announcements than on Liberal attempts to trigger a federal election.

As much as media advice to the Libs--find a narrative (of Tory perfidy) and stick to it--sounds nice, and is to a certain degree useful, it isn't always so easy: sometimes you just have to toss whatever is at hand.

Also, you are subject to the whims of media attention spans: why did the MSM suddenly cue to Tory patronage stories now, for example, when the original story dates to a Susan Delacourt column from July? Were they waiting for somebody to wrap it up for them in a nice flickr presentation? Or did they just get bored with bashing Iggy and move on the next smelly object that attracted their attention, like seagulls picking through garbage in a mall parking lot?

In any case, now that Tory patronage scandals have got their attention, I suggest feasting upon the latest in the L'affair Housakos, in which senator and receiver of Tory largess Leo Housakos makes like Tony Soprano and blames a fellow Conservative for finking him out to the press:

Mr. Housakos blamed his troubles on “somebody in my own caucus,” and said, “I'm going to take care of him soon,” La Presse reported Wednesday.

Quick! Someone drag the Ottawa River!

And yet, NANOS shows the Tory lead widening.

NANOS has become an outlier.

Yet Michael picks a cherry while complaining about picking cherries.

BTW - If BCL wanted to pick cherries he could be going on about the H-D poll from last week.

NANOS has become an outlier.

So you conveniently assert.

Yet Michael picks a cherry while complaining about picking cherries. HarperBots really suck at this whole debating thing :)


Context, KW, context. I realize its a dubious and complicated concept for you left-tards to grasp, but I haven't given hope yet. :D

Actually, no. I have given up on the notion you clowns can be educated in any meaningful way.

Every single pollster show liberals are polling dramatically lower since repeating "time is up" by MI in Sudbury.

Whether the lead is 10-14pts does not matter in the short term.

Whether you die from a car or plane crash the end result is the same ----> death.

The Liberal party has returned within the margin of error of their October 2008 results.

The latest Ekos Poll has a MOE of 1.7 and the Liberals have moved 1.6 so nothing has significantly changed from last week.

I applaud BCL and others who want to believe the CBC, WK, Wayne Easter prop gate are shaping public opinion.

A much bigger problem for the Liberal party is the greatest strength (MI) has been neutralized by his own advisors.

They won't let him speak beyond platitudes and empty rhetoric.

Do you think MI is resonating with the voters and his base?

Bad news for Conservatives, I'd say.

Are you printing the ballots?

We don't have that option of combining those votes against any single party.

Did you work as an accountant for Nortel or Enron?

Don't get lippy, CanadianSense, or I'll get Housakos to have you whacked. Or I'll get Michael up there to pick one more cherry...a black one. Yours.

watch out Ti-Guy, you might stumble on CS's secret Igstash. I hear its quite sticky.

Ottlib called this one already. Takes time for this stuff to have an effect.

Here's hoping the media actually start asking Harper for some substance to his deficit reduction plans.

Here's hoping the media actually start asking Harper for some substance to his deficit reduction plans.

I'm hoping the next time, Canadians (or more importantly, Americans) take up the suggestion floated around 1993: "Default with Dignity."

We were scammed six ways to Sunday the last time when we were told that if that deficit and debt weren't controlled, we'd go Third World. Barely 20 years later, total wealth has increased substantially, the middle-class has stagnated and we're back to massive public debt.

Sheesh. You sound like the denialists finding a bit of cooling in part of Antarctica.