The Inevitable Next Step 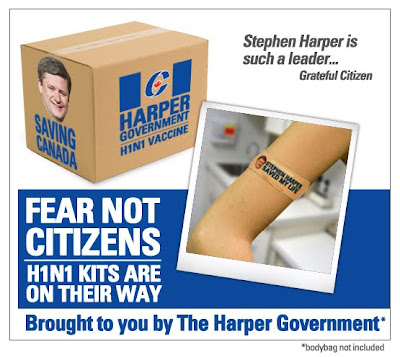 But, as Imp points out (and they're the source of the graphic), if you live in a Tory-held riding you will also get a regular flu shot, two tetanus shots, a box of prophylactics, a CPoC coffee mug, and a bowl of soup. If you are from Toronto, on the other hand, you will be expected to write a 3,000 word essay on why exactly it is you deserve your flu shot.

Posted by bigcitylib at 8:52 AM

What are three words you'll never see at CanadianSense's blog?

I live in a NDP riding does that mean I only have to write a 1,000 word essay?

What does "marketing" mean by the way, CanadianSense?

Let's not even start with CS' iggy fantasies...

"What does "marketing" mean by the way, CanadianSense?"

Hey! If it doesnt involve a pic of Iggy and a box of tissues then CS isnt interested.

Besides, that was 4 words.

It's that kind of adding skills that leads him and other Cons to think the stimulus is being spread evenly in the country.

I enjoy, the entitled, intelligent meme you guys project.

Unfortunately "Oligarchies" are no longer in fashion so unless your marketing team can figure out a new meme on how to get those less worthy luddites to mark your guy in the ballot box you are stuck watching the show from the cheap seats.

who is suggesting the system is fair or perfect?

It is funny having you complain if the CPC riding have 10% more stimulus.

want something (a rink)done by your Federal MP, elect a CPC.

I don't want to interrupt your strategy of suggesting the CPC are screwing the other ridings or are repeating ADSCAM meme in the press.

If the opposition spent less time surfing the web late at night clicking on the Harper Nac Youtube button more "novelty" cheques photos could have been taken.

Whining about not being invited to those novelty cheque events and those fancy Report Cards Town Halls after the fact is really petty.

Hey! If it doesnt involve a pic of Iggy and a box of tissues then CS isnt interested.

Frankly, the rest of us are going to need hazmat suits to protect ourselves from the rising level of spunk.

. . . the stimulus is being spread evenly in the country. - OSL

Oh shush. Ontario got an extra $10 billion to bail out dead-companies-walking GM and Chrysler.

Not only are Canadian taxpayers paying for GM Ontario workers pensions, they are guaranteeing the two automakers new car warranties.

Beg to disagree, but I'm pretty certain CS has a fine collection of bedwetting videos to help in that regard.

While I'm here - I find it quite amusing the HarperBots are all over every Lib blog telling people there is no scandal here, and this will all end in the Grits falling off the face of the earth for good. If so then why your 'good advise' about dropping the charges of pork-barrel politics against Harper? Why not indulge the Libs in their suicidal tendencies?

The more I hear the Harper-apologists say there's no story here, the more I think the Liberals need to hit harder.

Ontario got an extra $10 billion to bail out dead-companies-walking GM and Chrysler.

3.5 billion of that came from Ontario taxpayers, Albertard. Given that Ontario has contributed 200 billion to equalisation over the years, we're owed.

That 10 Billion can cover the interest payment.

"3.5 billion of that came from Ontario taxpayers, Albertard. Given that Ontario has contributed 200 billion to equalisation over the years, we're owed."

Well put Ti!
I’m tired of hearing Ontario-hating Albertans screaming about getting screwed by the east 24-7. We bailed out there ungrateful asses during the Great Depression, then let them keep getting transfer payments while collecting oil revenues right until 1963 (you know, like how NFLD had it until Harper screwed them) in order to strengthen the Alberta oil industry. We’ve dutifully been paying out billions and billions and billions of our taxpayer dollars to help out the country for over 140 years, all in the naive hope that all 10 become have-provinces someday - and not once have we bitched. Ontario is most definitely owed in our time of need – BIG TIME!!!

I agree WK and his war room strategists need to keep doing the exact same things.

I am very impressed with leadership and numbers on some many files.

I am confident every polling company in September must have been fudging those numbers too for CPC cheques.

Full speed ahead aboard the Doorknob express!

Given that Ontario has contributed 200 billion to equalisation over the years, we're owed. - Ti

You forgot to add the $100 billion extracted from Alberta through the NEP. When those dollars are factored in, no province has ever contributed more per capita to the wellbeing of Canada then Alberta.

Now go back to complaining about oversized cheques and working on your potty humour.

Well why don't we start adding in more stuff like income tax and gst? Alberta or no other province has raised more money than Ontario.

Some Liberal bloggers have insightful, interesting and funny posts. The pretend "gatekeepers" like Ti-guy, Tokw are not representative of the majority. They are the fringe, hence the bedwetters monikers.

It must suck to be a federal Liberal when George Smitherman refutes the rumours that primarily, it's Conservative ridings that get infrastructure payments:

Gerard Kennedy charges that recreational facilities in Liberal and NDP sections of the province don’t get adequate funding.

Toronto has 23 ridings, 21 of which are held by Liberals and 2 of which belong to the NDP.

The Liberal representative says those ridings get about 38 per cent less cash than Conservative parts of Ontario.

But, he continued, they only looked at the Recreational Infrastructure Canada (Rinc) program. While that would indicate that Conservative ridings received more cash than Liberal holdings, it doesn’t tell the whole story.

The Rinc program was open to not-for-profits and municipalities, he explained.

“So the fact that there are 450 municipalities, many of them small, meant that there were more requests in the mix for smaller communities.

“I think that’s why you see it’s a little more distributed towards rural Ontario and by coincidence, that happens to be where Conservatives represent the ridings."

Toronto scored big when other initiatives were considered, Smitherman argued.

"The knowledge infrastructure program, which is for post-secondary education, you’ll see that Toronto actually comes out with a higher degree of investment than its proportion of population...I’m pretty confident that there’s going to be a very equitable regional distribution once we’ve completed the allocation of all those dollars.”

Prime Minister Stephen Harper also dismissed Kennedy's allegations. He said that it was the Liberal Ontario government that chose which projects would receive funding.

The Globe and Mail looked at more than 750 projects funding by Recreational Infrastructure Canada. According to their research, Tory ridings received an average of $2.1-million, compared to $1.5-million on average for opposition constituencies

Ouch, thats a kick right in the federal Liberal junk.

Too late now CS, the damage to Team-Harper is done.

Now there is a narrative, and plenty of damaging evidence has been collected (from at least 5 different news sources to date) using the government’s own numbers to show there is indeed a disproportionate amount of stimulus funding going to CPC ridings. Harper may have somewhat set a narrative and painted Iggy as an outsider who doesn’t know enough about Canada. Likewise Harper has now just been successfully painted as an old-school pork-barrel politician & hypocrite. Each new spending-scandal from here on in will simply reinforce this.

The Grits are not going to get a knock-out by this, and I don’t think they ever expected one. They can’t force an election and expect to win, but they sure made it difficult for Harper to win a majority now, and most likely for good.

Should the Grits keep crying “pork” 24-7 to gain in the polls? No, of course that would be counter-productive. I actually agree with you that Iggy needs to start rolling out what the Libs actual policies are. But any new mini-spending scandal found from this point on will sink Harper little by little.

You forgot to add the $100 billion extracted from Alberta through the NEP.

You want to blame "conbots" for trying to change the meme, you suggest this is a scandal etc.

Okey dokey! In your reality the plan is going well.

I wanted a real opposition fighting for responsible and sensible Bills. Clearly many people are not happy with 4700+ projects we understand mistakes will happen.

You would like to twist and pretend we must support everything the government does or passes.

The disconnect is the problem, the Polls are a rebuke against the Liberal Party. Period.

Read and look at what part took a significant drop in support. Look at the comments from many non parrots Liberals, pundits.

They ALL agree they want MEAT on the bones. They want a reason to vote for the Liberals.

Some of NEVER voted for any other party until we got Po'd at the Liberals. Period.

Some of us may return, but until using blanket statements to defend your prefence to censor dissenters only hurts your credibility.

Read the McGill study and stop blaming EVERYONE else for the 25-30% support for the Liberal Party.

Tokw, Time to grow up and stop acting like a bedwetter.

Many of us want to see MI vs Harper adult conversation.

You know, Oakville Crackpot...throwing around the word "meme" doesn't make you sound intelligent.

“You forgot to add the $100 billion extracted from Alberta through the NEP.”

Right Paul, the world-wide oil price crash and 80's recession had no part in that. It was all the NEP's fault.

I do agree the NEP was a way to drill directly into Albertan's wallets, but putting it as solely to blame for Alberta's hardships is incredibly naive. Please explain to me how the per capita GDP losses for Texas were not all that far off from Alberta's - with no NEP to blame.

Also that 100 billion is a top-end estimation that places almost no blame on the 1980's oil glut. Hardly accurate.

CanadianSenseless, if all these CPC spending stories are not newsworthy - why are they being reported by every paper & TV station coast to coast?

Fun fact: I just found out yesterday that Bernie Ebbers, former CEO of WorldCom, now serving 25 years in prison and rated by Time Magazine as the 10th most-corrupt CEO of all time, is from Alberta.

How come I didn't know this before?

You can ignore and pretend the media are not partly responsible and they are doing a great job when they push your crap, many of us don't read or rely on the MSM for "real news". We have tuned out the CBC, Toronto Star -see the sales, rating for them the last few years.

You want me to google real news get's punk'd with 100 links?

How cute. He's pretending to ask.

You can go on. Just give us a chance to lower our visors so we don't get any in the face.

CanadianSense said...
This comment has been removed by a blog administrator.
5:22 PM

I find it rather pathetic to get criticized by the Con trolls about the Libs pointing out political favouritism spending when they got all puffed up about puffins.

Harper need TO to get a majority and I truly believe that monies spent there are more political buying.

I have no doubt that the Liberal party thinks Ti-Guys thoughts for him.

How come I didn't know this before? - Ti

I don't know, because assholery comes first for you?

You're one to talk about being an asshole, Paul. DeSmogBlog dedicated an entire post to your trolling.

Ti, get some fresh material. Entertain us, ok?