Not A Good Way To Start Your Week 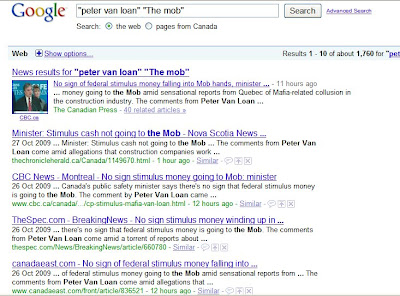 The result you get by googling "Peter Van Loan" + "The Mob".
Meanwhile, Bourque, who bats about .250 on such things, thinks Housakos
...may be turfed from the Conservative caucus because of lingering ethics issues that have elicited a barrage of questions in the House of Commons to the extent that the Quebec politico himself has called in the Senate ethics officer to probe potential derring-do and unknown nefarious deeds. Senior Tory sources who've read the tea leaves and who spoke to Bourque on condition of anonymity assert "the situation is untenable". Such is the breach of trust within the highest echelons of Team Harper, otherwise preoccupied with ravishing glances at their current poll numbers.

I am glad and sad how you don't see where this leads.

Possibly this explains the comparison of checkers vs chess.

I think it is very important to not interrupt a meme that helps your opponent self-destruct.

Hint Liberals reminding voters politicans are corrupt is a great meme. Thank you.

LOLOL And the party of virtue was going to do politics better. "THEY" were not corrupt and scandalous. So CanadianSense, are you checkers or chess? And I agree... Liberals should not interrupt the CONReformers corrupt implosion. LOLOL

lol CS is not sophisticated enough for chess. He's still grasping the nuances of paper rock scissors with a box of tissues and Iggys press kit under one arm.

Kitt if the CPC popularity in Narnia is sinking the CBC have not been picked it up yet, please contact them ASAP.

Hint who was named a "made man" by a convicted mobster?

I don't play, I observe and this is like wafers,logo smear won't end well.

Interesting. Alfonso Gagliano+mob gets about 1500 hits.

The letters on this blog looks like the blogging Tories sight...they are sure after you.... must have hit a sore spot.

Interesting. Alfonso Gagliano+mob gets about 1500 hits.

"CanadianSense" + "girlfriend" yields no hits at all.