Would You Please Stop Doing That 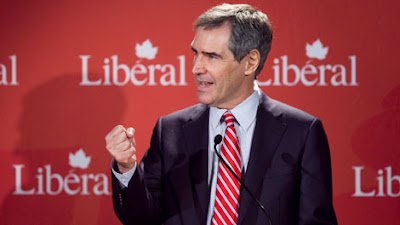 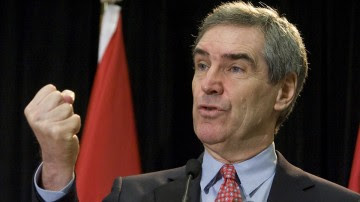 And the two-handed version: 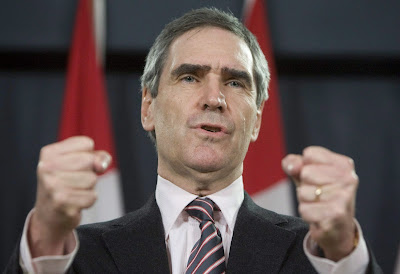 I don't know what this gesture is supposed to communicate, other than that Iggy has some kind of "grasping" fetish. Please make him stop.

So perhaps you would prefer this.

I dunno, I find it kind of sexy! Better then the 'thumbs up' which reminds me of Tim Horton's, soldiers and brrrrrr, that nasty Don Cherry.

Its better than the stupid smirk/sneer we get from Harpo or the fake angry look we get from layton.

The hand gesture I hate the most is the closed hand with the tip of the thumb pointing up slightly. Clinton popularised it during his tenure, probably on the advice of some strategist to avoid pointing with the index finger which is considered rude in some cultures. Now they all do it.

Huh. It even has its own Wikipedia entry: Clinton thumb

FrankD likes the gesture though. He finds it strangely galvanic.

This from someone who claims to be very well read.

CS is a fraud.

And Harper did what most of his life? Oh, yes, sat on his butt.

The Harper Bobblehead gang with the thumbs up drives me crazy - you know what they say to do with your thumb - sit on it and rotate.

Be interesting to look a photos of previous PM's/leaders making speeches to see how they looked.

I agree with the HOST original post MI should stop making gestures that Rick Mercer or people who have too much time on their hands can photoshop.

I can't remember but did Jack Layton at 26% also beat Dion as best PM score too?

Does anyone know if the fist-clenching thing is a natural pose for Iggy?

Or is the fist-clenching just supposed to indicate that he's not Dion? Maybe they passed it through a focus group or something first?

Or perhaps it is a "grasping fetish" after all (haha, nicely done.)

Does anyone know if the fist-clenching thing is a natural pose for Iggy?

I doubt it. A lot of Iggy's gestures look like affectations, the unnaturalness of which, for Canadian politics at any rate, has probably only recently been pointed out to him. I doubt he has any natural poses left in him.

Not that I care. This crap is irrelevant in the realm of ideas.

TG, CS is a real nut bar and an idiot. any discourse with him eventually lowers your own IQ. He claims to be a statisical genius which makes real ones look bad.

Terence being rude, refusing to follow the rules on many blogs has resulted in your bans.

TG is correct MI is not photogenic, but that is not the serious problem currently facing the Liberals.

He has improved by reducing "I" in his speeches. I don't think the 22 minutes bit had a "cool" factor.

Hopefully Peter can make some changes before they hit NDP levels.

Bob Rae is much more personable in person and on tv.

He claims to be a statisical genius which makes real ones look bad.

Actually, I can believe he's a statistical "genius." Given the fact any cheap machine can do advanced statistics these days, it's not much of an indicator of real human intelligence, something that is true for any human activity that can be easily automated.

At best, this kind of genius is very narrow and looks more like (idiot-)savant syndrome.

Are you an idiot-savant, CS? You can tell me. I won't laugh.

TG is correct MI is not photogenic

I never said that. Are you able to read for comprehension?

TG
try to stay on topic, getting advice from Terence Parnel?

He is batting zero since Martin lost power. He still refuses to provide any links or proof to his "inside knowledge" of posters.

Happy Halloween, don't forget to scare the children with stories of a CPC majority.

try to stay on topic,

I am on topic, knob. Learn how to read for comprehension.

TG - CS just does not know what "on topic" means, as he demonstrates over and over again on this blog.

Obsessing about fist clennching instead of discussing ideas is sad. We are a superficial lot. I blame MTV.

what is it you guys and the use of props?

After the Liberal doorknob publicity stunt when are you going to learn?

Wait! Wait! I have one too!

Personally, I think he's trying to channel Madonna as Evita or George Michael.

Obsessing about fist clennching instead of discussing ideas is sad. We are a superficial lot.

I wouldn't mind if the frikkin' righty trolls weren't so frikkin' humourless.

This post merited two, maybe three snarky comments and one or two serious ones. But the trolls showed and it became a politcal discussion.

Bah. Fuck 'em. Up their cornholes.

you should get together with Gene apparently both of you have a great deal in common, a need for props.
=======
Back again on post...

MI has a new themesong?

wow lame comeback Crackpot, even for you.

I mentionned getting boned in the corhhole and CS responds with something about clenching.

It's a Darth Vader pose. "You don't know the poowweerrrr of the Liberal brand."

Maria said...
This comment has been removed by the author.
8:25 AM

He act so weird,well Its better he doing thumbs up rather than that.