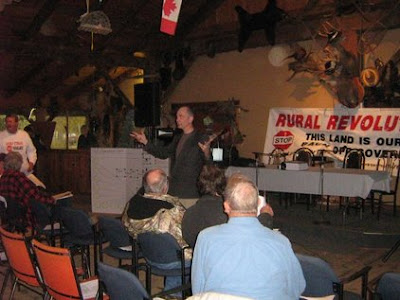 ...commands them (Ontario Land Owners) to "get it up", or maybe "to rise up", or something. In any case, it doesn't like these guys are moving anywhere at high speed in the near future. More walkers and dentures in this crowd than back-stage at a Rolling Stones concert.
Interesting that the movie "300" plays such a large part in Gerry's speech. Mistakenly criticized for its alleged fascist ideology, the movie is really about a bunch of muscly white guys who run around in their underwear and engage in slappy fights with some equally muscly black guys covered in "bling".
Probably brings back old memories for this gang.

He has a great need to be important and famous.

Gerry needs to be encouraged. I mean, what reason do libertarians have to support Harper? Increased spending, a deficit, more debt...

He has a great need to be important and famous.