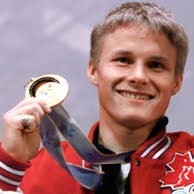 And why not? He's at least as sexxxy as Gerard Kennedy. And Canadians are a forgiving people.

(By the way, since no one else is running for the nomination currently, I imagine he has a good chance)

I assume Ross will be in favor of marijuana decriminalization/legalization.

Ross and Stock should have a wet suit competition.

Word verification = ourecion. Definition: what the state does when it prohibits the use of harmless plants in the name of the common good. Example: "Ever the humanitarian, Prime Minister Harper ouerced Marc Emery, then played the piano to cheer up everyone else."

A "Wet suit competition."
This guy kills me!

He and Justin will make such a cute pair.

lol Ross strikes me as more of a bear man. Maybe a bit of cross floor romance with Baird eh FrankD?

He and Justin will make such a cute pair.

Let's all leave the thread to give FrankD a little "alone time" with this reverie...and a tubesock.

another sacrificial liberal lamb for Day to whack upside the head.

Maybe his first clue was the nomination was uncontested.

Or the second hand smoke problem still is a problem.

another sacrificial liberal lamb for Day to whack upside the head.


I love how these milquetoasts are obsessed with making a he-man out of the rather prissy Stockwell Day.

Miss Day is not going to whack anyone upside the head. She's much too genteel for that.

I don't think laughingStock Day has anything to worry about. That riding is packed full of his fellow Talibertans - you know, those folks who crow incessantly about how great Alberta is, then pack up their motorhomes and ATVs and head for B.C. as soon as they get their fat fingers on a pension cheque.

His run has certainly benefited by the Alberta migration, but since the 'economic downturn' the # of homes for sale have skyrocketed, many being Albertans selling that second home to go back to affordable hinterland. I'm not saying Stock's in danger, but the few people I know there have never been all that fine with having an MP from Medicine Hat representing the Ogopogo...

rockfish said...
This comment has been removed by the author.
3:26 AM