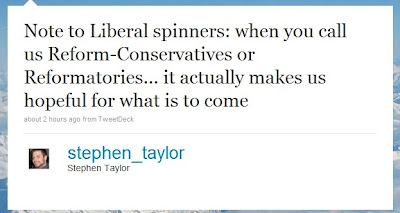 This from the leader of the Blogging Tories, in other words the Conservative Party of Canada's official on-line representative.
So we can be hopeful for the repeal of the long-gun registry, of section 13, making it easier for Neo-Nazis to ply their trade...and for all those crazy private members bills re abortion becoming the official gov. bills...and who knows, maybe the repeal of the metric system.
I dated a Tory girl once, and she gave me a glimpse of The Hidden Agenda; the repeal of the metric system stuff was in chapter 32, just after the secret recipes.
PS. Thanks for blowing that majority, Taylor.

Posted by bigcitylib at 7:31 PM

The last private members bill on abortion,
was from a Liberal MP.

Besides, everyone knows a Lib gov would never let this kind of bill go anywhere. The Tories...yeah, if they get a majority.

Anyway, for a chuckle: Nebbishes on Parade.

"Thanks for blowing that majority, Taylor."

I doubt it. If people were actually reading the blogging tories it would have been blown a long time ago.

Section 13 is a joke and should be abolished. Steyn and Levant have uncovered some serious abuses when it comes to section 13, like the fact that the human rights tribunal employees are the biggest spreaders of neo-nazi rants and anti-semitc trash just so they can investigate themselves.

I think Gerry Nicholls is great! I can't see any reason for libertarians to keep supporting Harper.

Look at the great stuff he gives us:

So without further ado here are my Top Political Turkeys:

Flaherty earned a spot on the turkey list because of his cruelty to Canada's economists, who had to keep up with his always changing deficit numbers. First, Flaherty said the deficit was $30 billion, and then he said $40 billion, then $56 billion, meaning our poor economists had to constantly redo their calculations. This unfortunately led to tragedy when one economist became so frazzled he got caught between his supply and demand curves.

Nicholls knows Harper, and has worked with him, so I get a kick when he knocks him.

I'm going to join up and watch this.

Wouldn't a Federal Wild Rose party be a wonderful thing to see? Even sucking just 10 percent of the vote from Harper would deflate him.

I doubt very much that the Conservatives want to re-open the abortion issue. also over the last few years they have weeded out their more extreme social conservative memebers.

I have to admit, it's fun watching the hand wringing desperation, you lot are certainly flailing about, kind of reminds me of that "so you wanna fight" series where people try to settle scores in the ring. No skill, no finesse, just flailing blindly hoping something will connect.

This being away from the public trough and your rightful place as the natural governing party isn't sitting well with you is it?

Already I have heard legions of people are going to vote liberal now because Harper was playing "air piano" - you just can't make this stuff up.

I have to admit, it's fun watching the hand wringing desperation, you lot are certainly flailing about, kind of reminds me of that "so you wanna fight" series where people try to settle scores in the ring. No skill, no finesse, just flailing blindly hoping something will connect.

What a rich, fantasy life you have.

What a rich, fantasy life you have.

It's the sage I burn every night dude, makes things crystal clear

Excuse for what, asshole?

Excuse for what, asshole?

Gee I dunno - maybe being about as coherent as a herd of retarded cats.

But then I think all spineless leftards must have an excuse for being the way they are, no one could be that stupid on purpose..

"spineless leftards".....who runs the most secretive government in generations?

"hand wringing desperation"....lets see now Harpo preached he didn't want an election and thye support that. So now you think people are now in love with him and his policies. I say call an election now and lets see where the crumbs fall.

No wonder people call you an idiot.

But then I think all spineless leftards must have an excuse for being the way they are, no one could be that stupid on purpose.

my unsolicited advice to liberals:
if you want to dull the pain of the last Ekos poll, I recommend Progressive Indian's "sage burning" instead of delusions of game changing air piano stunts or stephen taylor tweets.

Did anyone ask for your advice, Bastien?

no, that's why i called it my unsolicited advice.

Yes, you did. Good for you.