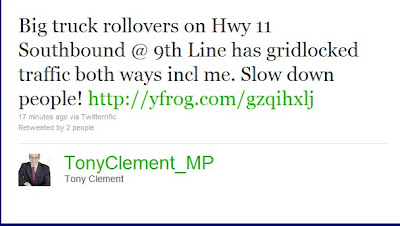 The link in the tweet goes to this cell-phone (?) pic. Looks to me like its been shot from the driver's side. 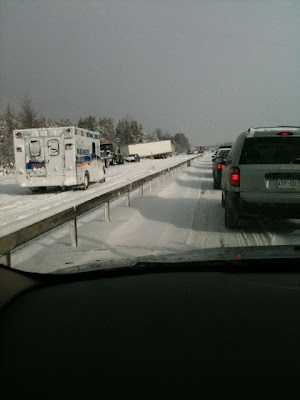 For Mr. Clement's edification, the law of the land:

In a move that I applaud, the government of Ontario officially passed Bill 118, the ‘Countering Distracted Driving and Promoting Green Transportation Act’. The act bans drivers from using handheld communication/entertainment devices while behind the wheel. Bravo Ontario, bravo! The act will start to take effect this fall, to give folks time to prep for the change
Original tweet here.
Update: According to the legislation, if Tony was not in motion he's off the hook.

In Tony Clements defense (am I really saying that?) it is likely that his car is not moving. At least I'm sure that is how he justified the tweet & pic. It would, however, be sort of fun to see him fined under his own law.

I'm sure the car is not moving. Note the brake lights. I'll bet (but I haven't checked) that the law doesn't really have a loophole for that.

Steve "I make the rules" Harper will have this covered, no doubt.

Doesn't he have a chauffeur?

My bad. If Tony was not in motion than he's off the hook.

MY GOD! This is even bigger that the communion wafer story! I'd bet the CBC could mine this one for weeks.

Dunno. Maybe he and Tony can go before the judge together. Don't know if either should be driving, though.