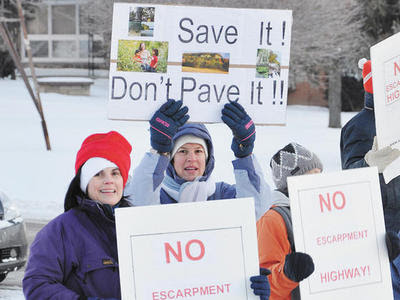 Now you know why the $1 billion in GO Transit expansion spending (cost split between the Feds & ONT) is happening over the next several years. It helps a lot more commuters over a greater area, for a lot less money.

In other words, governments realize they can't afford building new highways anymore, and taxpayers are learning that roads are not free.

Just imagine how much gridlock could be eliminated with 8 billion dollars of investment in mass transit, certainly much more than 33km of highway which they'll probably gift to some of their corporate friends anyways ala the 407.

Perhaps that is why Hudak is so gung ho for this project in the first place, gotta keep the bosses well fed on the public teet

no matter how dim Timmy is, like a clock he's right once in a while.
The QEW expansion from burlington to Niagara is a scar over some of the best orchard and tourism land in Ontario. The amount of exhaust fumes spewed into the atmosphere in Grimsby, St. Catharines and Niagara Falls is tragic. We need to begin the plans to reclaim this land from under the asphalt ribbon today. It'll take 50 years but the sooner started the sooner finished.
We have the Californis of the north in the Golden Horseshoe. We should reclaim it from under the square kilometers of asphalt that has just been paved over.
The main reason for the road is to get from the 401 to the Fort Erie bridge crossing. That the trucks pollute the air near the lake is absurd.
the land above the escarpment is marginal for agriculture and could use commercial development.
We should reclaim the Lake Ontario shore from Burlington to Niagara Falls.
Of course, rational economic and environmental thought rarely crosses the minds of one or two term politicians, or bloggers for that matter.
Our environmental and sustainable development strategies are jokes. We say one thing and do another. We prevent vineyard owners from parcelling land for their children to build on then we approve the building of a new hospital on virgin land instead of redeveloping the downtown of a moribund city.
We allow Niagara College to lacerate the escarpmaent with a showplace campus though they are grateful enough to landscape a mock escarpment in their courtyard to impress visitors.
We celebrate the growing of wine grapes in a marginal climate which takes much more agricultural chemical than more appropriate regions and install diesel and propane burning windmills to prevent frost damage for millionaire grape growers, all subsidized by we taxpayers.
Sorry for the rant...I got on a roll...