Thanks to an anonymous FreeDer, here's the letter that Tim Hudak claims not to have seen: 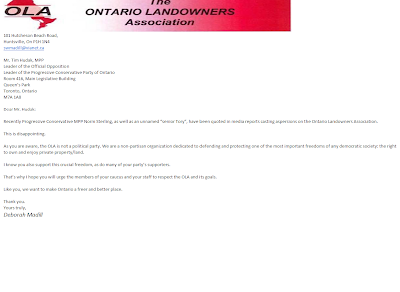 This isn't the first time the OLA has written to politicians an various levels demanding respect. It will be a little more difficult for Hudak to blow them off, though, as they have a foothold in the PCPO caucus in the form of Randy Hillier. And of course Deb Madill insisting that the OLA is non-political is a bunch of nonsense. Here's former president Jack MacLaren outlining the groups political objectives back in February 2010. If there is any consolation, the group seems to have failed in almost every one of its iniatives (for example their attempt to have the Otonabee Region Conservation Authority (ORCA) disbanded). Tim Hudak has to be worried that they will take the PCPO down with them.

PS. If the letter above is difficult to read, here it is in news release form.

Randy Hillier and the OLA are McGuinty's best friends. Thanks to them and their infiltration of the PCPO, Dalton will be premier for the next 100 years.