The Bunny Is Stephen Harper 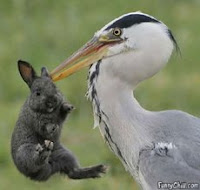 The first week of campaigning comes to a close and I am feeling pretty empowered. K. Grandian from Tyee magazine interviewed me yesterday on the subject of Politics 2.0, and that should be appearing not too long from now.
Meanwhile, I haven't managed to force the resignation of a Tory Cabinet Minister yet, but it is a long campaign and I shall redouble my efforts.

(This is probably it for today. Later on, I am off to drink beer and plot rebellion with the ProgBloggers)
H/T Naish.

Posted by bigcitylib at 6:25 AM

Email ThisBlogThis!Share to TwitterShare to FacebookShare to Pinterest
Labels: Stephen Harper And Me

I guess the commanding lead the conservatives are enjoying has a lot to do with the fear and loathing the Green Shift has created among ordinary Canadians.

It certainly gave me the willies.

Tom Friedman, 3 time Pulitzer Prize Winner (Flat Earth Books), expert on OPEC, Middle East and now the environment has a new book out called "Hot, Flat and Crowded", in interviews in the US was discussing the Obama plan and the McCain plan, saying neither will get the job done, but that Obama's was the better plan - and he said th only plan that would work is a green tax...

Harper doesn't even want to accept the findings from research his government commissioned itself and tried to "disappear:"

The Green Party is releasing a secret report to the federal government from one of Canada's leading economists, obtained under the Access to Information Act in 2007. The report supports a carbon tax as an effective way to make significant cuts in greenhouse gas emissions and concludes that a $50/tonne tax on carbon would have an insignificant impact on the Canadian economy and would open tremendous economic opportunities. The model estimates this carbon tax shift would cut emissions by about 36 megatonnes (MT) by 2010, 59 MT by 2015 and 114 MT by 2030 (Table 3).

Keep on lying to Canadians, Harper.

Scandinavian countries have had mixed results with carbon taxes. Why would we expect Canada to be any different?

The Lib's can keep flogging their green plan if they like; if they like sitting on the opposition benches that is.

Unfortunately for the Liberals, here's the type of rabbit Harper really is:

Sorry to dash your hopes BCL.