A point raised by global warming skeptics again and again is AGW Theory's apparent inability to explain the Medieval Climate Optimum, a time of unusually warm climate in the North Atlantic region, lasting from about the tenth century to about the fourteenth century. One of the graphics that frequently turns up in the denialist "Litterature" is from Climate Change Record in Subsurface Temperatures: A Global Perspective (Science 9 October 1998: 279-281) by Henry N. Pollack, Shaopeng Huang, Po-Yu Shen. Look back about 800-1,000 before present. Pretty warm, right? Way warmer than today. Except that Pollack, Huang, and Shen apparently got a little bit sloppy in labelling their figure. The "0" or present above actually represents about 1900. In their new paper they provide an updated figure: 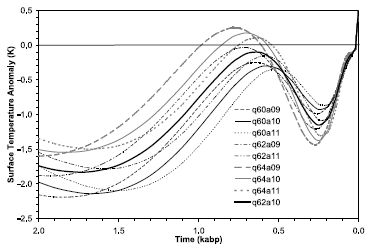 Here "0.0" stands for (roughly) the present, and temperatures, represented by the line at right, are clearly higher than during the MWP. In fact, the graph resembles Mann's Hockey Stick.
But, as a special bonus, it isn't. It is derived from a seperate line of evidence--specifically, from the drilling of bore-holes.

Posted by bigcitylib at 5:02 AM

Nice post, but a minor point. I think the graphic that you use is from their GRL paper released a year earlier. I don't have a link for it, but will see if I can track one down.

I liked Connolley's clear words translation of a paragraph of their paper: Translation: f*ck off you septic b*st*rds and stop quoting our paper for your wacko ends.

Here is a link to the paper. I agree that the diagram is not labeled well, but in the text they do say

We exclude data with representative depths less than 100m ...

Which apparently excluded the last 100 years or so. However their continued use of "present day temperatures" sure confused the issue.

John, they admit in the later paper that they should have been clearer with their term "present", although for their purposes it might have been good enough.

I may add that bit to the post later, as well as your link, but Blogger is being lousy this morning.

So where are the denialists? Isn't anyone going to post "Look over there! A shiny object!!!!11!"?

I hope this isn't a lead in to resurrecting Mann's Hockey Stick.

Mann's latest paper has already come under criticism from one of the world's leading experts on principal components, Ian Jolliffee.