The Decline And Fall Of Surface Stations

When Anthony Watts launched Surface Stations back in June of 2007, his purpose was to demonstrate that some if not all of the U.S. temperature increases recorded during the 20th/early 21st Century were due to "localized changes in the temperature-measurement environment". In other words, due to poor siting of the surface stations scattered across the U.S. to record local temperature information. The idea was that a small volunteer army would fan out across the U.S., carrying notebooks and digital cameras, and rank these stations according to CRN siting guidelines. At some point, when enough stations had been assigned a rank, an analysis of the temperature record would be performed based on the data gathered only from stations that were "well sited". And then, hey presto!, no more Global Warming


While the project got off to a roaring start, with over 200 stations visited and analysed within the first couple of months 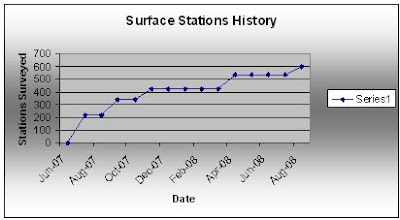 ... this graph, based on the data points assembed below, shows a project that, since about the beginning of 2008, appears to be stagnant. A glimpse of the Surface Stations website confirms this, with the main page's last up date coming in April of this year.

So what is behind the slow death of Surface Stations?


Well, one issue relates to the accessibility of the stations themselves. Anthony's volunteers clearly went first for the "low hanging fruit"--surface stations closest to their own geographical location--and only later proceeded, at a slower pace obviously, to survey the more remote stations.


Additionally, something very important happened in September of 2007. By this time, 340 stations had been surveyed, a more than large enough sample (according to frequent Roger Pielke Sr. co-author John Nielsen-Gammon) upon which to test the Watts Hypothesis. And in fact John V. did just just this at the Climate Audit website. His conclusion:


...this is starting to look like a great validation of GISTEMP [Goddard Institute for Space Studies Temperature Analysis].


In other wordings, removing the poorly sited stations had no effect of the temperature record. Hey presto! Global Warming was back!


Since this time, nobody has attempted a comparable analysis on the ever-larger data-base of stations that Anthony and crew have compiled, with Anthony apparently choosing to hold off on this step until a complete record has been compiled. At the same time, the number of stations added to the record has declined precipitately.

These two facts are, I believe, linked. As long as the project is still on-going, the Watts hypothesis can still be said to be in play. As long as the hypothesis is still in play, the denialist movement can use it as a bullet in the warming wars, and the lower end of the MSM will still report it as such. Which is to say that, as a tool of anti-AGW propaganda, the Surface Stations project is only useful only insofar as it is incomplete and untested.

PS. Interestingly enough, Surface Stations Canada never even got off the ground.

I've been wandering what's happening at Surface Stations too.

1) A tremendous number of surface sites are poorly located and poorly maintained.

2) John V. did do an excellent analysis of some surface sites, and then disappeared from the debate.

3) The US is shifting over to the Climate Reference Network, which itself places huge importance on siting and freedom from contamination. It, more them anything, will help resolve the debate over the accuracy of the USHCN.

Attacks on Watt's project do not negate the fact that decades long sloppy gathering of temperature data is not conducive to confidence in that data.

Like the Hockey Stick, we may still find that much of our trust in the historical surface site record is not warranted.