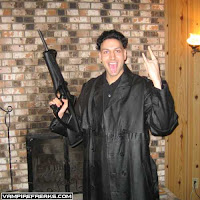 ...whose weapon Stephane Dion wants to confiscate, and who Stephen Harper has sworn to protect.

Posted by bigcitylib at 4:50 AM

1. Weapons of the type you reference are already banned. So Dion is lying big time when he says he would "ban" assault-type weapons.

2. "Harper has sworn to protect ..."? Come on, grow up and stop lying like your (English-only) deaf leader, Dion.

There's only one party Soft on Crime, and that's the Liberals (the NDP don't count, not to be taken seriously).

What's next from you and your (English only) deaf reality-denier? Soldiers in our Streets? Yup, that really worked last time too.

That's not an Assault rifle.

It is a semi auto replica.

Seems to me, you idiot, that the whole registry/licensing thing completely failed here. As every gun owner told you it would.

And since you're so bitter about us being right, now you want to show how powerful you are, how you can ignore the rights to property of law-abiding people who have no intention to ever harm anyone. Liberal fascist!

What gets a lot of us is how much your essence, your identity seems to be so wrapped up in your gun ownership. Your property seems to define you and that strikes the rest of us as bizarre...loony, in fact and makes us wonder whether you people should be even allowed to own a plastic spork.

A lot of you gun nuts are howling and shrieking from basements in heavily urbanised centres, where hunting (either out of necessity or sport) is not possible. So it makes the rest of us wonder what exactly is motivating this hysterical attachment to gun ownership and whether a significant proportion of you could go VTech any minute.

It's a reasonable concern.

This is the guy who ran his Jeep into a crowd of university students. Do you also want to ban Jeeps and all other vehicles that look like Jeeps? Shouldn't there have been a "No driving into people" sign somewhere, so that students could feel safe?

ti-guy, you know nothing about firearms. Worse, your ignorance leads you to fear them. You don't know any firearm owners; again, your ignorance leads you to fear them. Your urbanite bigotry against anyone outside of your little cement world is incensed at people who actually can use firearms safely and with skill, without commiting any crimes. You cannot fathom that some guns aren't used for only killing people. You are narrow-minded to begin with, but your lack of intellectual honesty about learning about the other side of an argument lowers your credibility in this debate. If you cannot voice the other side of the argument, you've already lost.