At the Tory's NotALeader site, there's this thing called the Stephane Dion excuse generator, which you may use to send emails to people giving explanations of why you didn't do this or that little thing. The point being, of course, to mock the Liberal party abstentions from last Spring and Summer.
However, instead of using your own name you can use any name, like "Stephen Harper", and instead of your own email you can just make one up, like Sharper@hotmail.com. And, as to the message you send, well there's quite a bit of leeway as to what goes into it. For example: 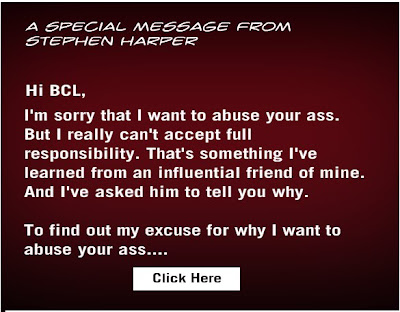 And then, when you click on the button to get your excuse, a little customization gives you:

I've sent off a good two dozen of these things to my favorite and not so favorite journalists and other notable folk. Tonight when I get back from work, another set of messages from "Stephen Harper" go out, a little bit filthier than the first, and so on and so forth until the Tory War Room either shuts that section of the site down or sends the police after me.
Dumbest...War Room...Ever.

I was looking to game it yesterday, but the the site's annoying sound effects just gave me a migraine. I'll try again today.

Jeepers, you really are more mature than I give you credit for. You're behaving like a teenaged jackass, whereas I gave you a toddler rating for most of your commentary.

You're behaving like a teenaged jackass, whereas I gave you a toddler rating for most of your commentary.

Is she claiming that BCL's actions are worse than the juvenile crap the governing party of the Dominion of Canada, the 3rd oldest democracy in the World, is shovelling out to the citizenry?

Can she really be that thick?

Auntie Liberal...post your address...I want to come over to your house and slap you into next week.

I saw this blog post on CBC tonight, just though you should know.