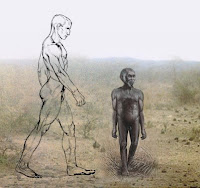 A bit of a switch.

A new paper on Homo floresiensis, the tiny people that occupied Flores up until perhaps 13,000 years ago. It argues that The Hobbits were not a pathological form of H. sapiens (microcephalic), not a dwarfed H. sapiens related to the Neolithic inhabitants of Flores, but most likely a dwarfed band of Homo erectus, relict, in terms of surviving, and evolved, not “primitive.” Contains some terrific skull measurements!

The significance of the new paper lies in the fact that, most likely, homo sapiens shared the planet with a very different human-like species until quite close to historical times. This means that various legends worldwide of "The Little People" might actually be grounded in fact, which means that remnant populations might still be alive to day in some of the wilder parts of the planet...which means that some day elf meat may be back on the menu!

(PS. Apologies to anyone who comes to BCLSB looking for climate science stuff. As you may have noticed, we've got an election going on here in Canada and though environmental issues bulk large in it, my focus has shifted a bit in the past couple of weeks. Specifically, what I'm really trying to do is arrange a sex scandal that brings down one or more Conservative MPs. Unfortunately, so far none of them wants to sleep with me.)

Posted by bigcitylib at 5:12 AM