Canadian Crop Circles are Back! What are They Trying to Tell Us?

After a two year hiatus, the Crop Circles are back, the first one having recently appeared in B.C.'s Okanagan Valley ! 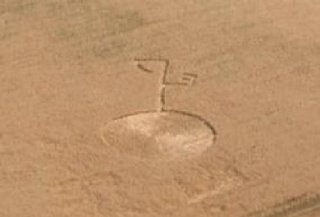 A compelling image, certainly, but what does it mean? Our interpretation depends upon whether we take the crop-circle to be a message from Canada's Secret Elite to the Aliens, or from the Aliens to the people of Canada.

To start with, let us assume that the circle represents Earth itself (Terra, Gaia, or "The Orb" in the mythos of early Thrace). If so, then it is clear that the branching pathway (top right) touches the edge of the circle at a point somewhere within the Ottawa River Valley. In fact, I would argue it touches down someplace very close to the National Capital Itself! It is therefore no coincidence that the pathway extends from that point to the right, obviously representing the election of the Right Leaning Harper Conservatives earlier this year!

Now, at this point there are several readings open to us:

1) If this is a communication from Canada's Secret Elite to our Alien Benefactors, then the fact that the path climbs a short distance to the right represents the Tories' brief post-election honeymoon. The fact that it later breaks up in confusion and then begins its inevitable decline represents their more recent troubles with the Afghanistan, Middle East, and Softwood Lumber portfolios.

In effect the message being sent to our Galactic buddies is "Don't Worry! They've peaked! Things are slowly returning to normal! There'll be no Tory majority in this proud land!"

2) If, on the other hand, this constitutes a message from our pointy-eared Overlords to the people of Canada, then it is clearly saying "Don't vote for these Tory clowns! They're going to be a disaster of inter-planetary magnitude!"

For note how their path since election day, extending from Earth's surface, resembles the flight pattern of a NASA rocket, exploding during the ascent phase and falling to the ground again in tiny tiny pieces (see thumbnail above).

In which case we must wonder: "Where were you little green jerks on election day? Thanks for cluing us in now, assholes!" For a negative endorsement from a superior, space-faring people (like Al Gore, but multiplied to the 7th power) would surely have swung enough votes to deny Harper even his current minority status!

Get on the ball, O Mighty Space Beings!

3) The third possibility is that some wine-stoned plowboy got a bit jiggy with the old combine. However, if this were the case a tiny black dot should be visible in the picture, representing a farmer passed out face down in the middle of his own wheatfield.

So, for the time-being at least, we must accept the image as genuine.

it means you are a gullible fool

"but what does it mean?"