One Israeli soldier was killed and four others were slightly wounded in fighting in the town of Bint Jbail, the Israeli military said. Five Hezbollah gunmen were killed in the battle, the army said.

Bin Jbail (or Bint Jabail, or Bint Jubail) was dubbed the "Terror Capital" of Southern Lebanon, and earlier in the war Israel gave its capture the highest of priorities. Here it is on a map of South Lebanon (bottom left corner of map): 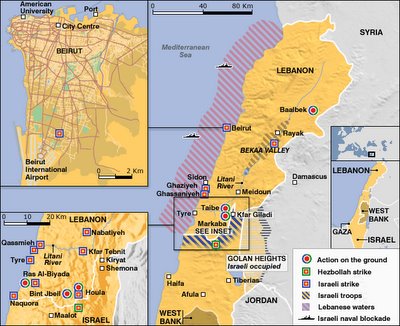 So the Israelis, who have vowed to clear a "buffer zone" to the Litani River about 20 Kilometers into Lebanon are, after a month of bombing the crap out of the Lebanese civilian population, still fighting and dying miles away from their objective. If you are wondering why Olmert and G.W. suddenly want an immediate cease-fire, and why Hezbollah and the Lebanese government are suddenly willng to tough things out a little longer, its because everyone realizes that the IDF is getting its ass kicked.

Newsweeks Conventional Wisdom feature has it dead-on this week:

Israelis are entitled to defend themselves against Hizbullah terrorists, but anyone can see this plan just ain't working.

Update: I note that Bilmon makes a very similar point in his column from yesterday. Either great minds think alike or we have entered the realm of the Bleeding Obvious.

Posted by bigcitylib at 5:24 AM

You don't have to be an expert to see where this one is going.

"If you are wondering why Olmert and G.W. suddenly want an immediate cease-fire, and why Hezbollah and the Lebanese government are suddenly willng to tough things out a little longer, its because everyone realizes that the IDF is getting its ass kicked."

what planet are you living in, or shuld it be what rock are you under??

see what ?? information from Reuters perhaps ??

Hizbollah Photo Scam Revealed
August 8, 2006: News service Reuters has taken 920 photos, supplied by one of its freelancers (Adnan Hajj) in Lebanon, from its database, after several online communities (people on discussion groups associated with blogs) noted that one, than several more, of Haij's photos had been altered. The alterations made the damage, by Israeli bombs, look worse, or made it look like there had been a bombing when there wasn't. Haij told Reuters that he had altered some photos to "remove dust." Reuters did not believe him.

Arab journalists, and Islamic terror groups, have played the media like this in the past. During the recent Palestinian terror campaign against Israel, there were several attempts to foist fake Israeli " atrocities" on the media. Some Arab and Moslem media accepted these scams, but the fakery was pretty blatant, and most media eventually rejected it. The prime example of this was the purported "Jenin Massacre."

The mass media is particularly susceptible to these scams, and quick to accept "proof" from shadowy Arab "journalists." These "plants" of false stories is an ancient trick. During the Cold War, the Soviet Union created an intelligence organization whose sole job was to create and circulate useful lies. Many of these successful and some remain in wide circulation. For example, there's the one about AIDS being a CIA experiment gone wrong (or right, depending on the version you encounter.)

But it's not just fake photos you have to worry about. Lebanese reporting of civilian causalities has also been suspect for some time. The Lebanese don't report any dead Hizbollah, only that, "nearly a thousand civilians have been killed." Independent reports mention dozens of armed Hizbollah fighters being killed in some of these Israeli smart bomb or missile attacks. Thus it's more likely that the Lebanese death toll is not only smaller than reported, but composed mostly of Hizbollah fighters.

Aerial photos show that nearly all the Israeli strikes have been very precise, with targets selected to avoid civilian casualties. Now we have the Haij photos, some of which indicate staged casualties. Examination of photos from Qana, where an Israeli smart bomb was alleged to have killed over fifty women and children, indicates that the dead bodies had been dead for some time already, and were brought to Quana so they could be brought out of a bombed building.

Mr. Siniora, in his opening speech, announced tearfully that 40 civilians had died in an Israeli airstrike in the border village of Hula, in what he called “a horrible massacre, a deliberate massacre.”

Later, however, he said that only one person had been found dead and that more than 50 people had been pulled from rubble in the village.

In his speech to the Arab League ministers, an emotional Mr. Siniora said that Israel had perpetrated "massacres" across his country and called for Arab countries to rally around Lebanon.

"We do not want the Lebanese state and the Lebanese people to remain the punch bag of Israel or anyone else," he said, his voice wavering. He finally removed his glasses and wiped his eyes with a white handkerchief.

not to mention many myopic, bigoted Liberals as well.


Hezbollah apologists a disgrace to Canada

About the only thing missing from the local NDP press release concerning the carnage in Lebanon and Israel was a paragraph extolling the virtues of the freedom fighters known as Hezbollah, that misunderstood band of lovable renegades battling the demon child that is Israel.

Leave it to the loopy left to send out, presumably with a straight face, a news release condemning Prime Minister Stephen Harper for his "pro-Israel stance," and calling for our leader to issue a plea for an immediate ceasefire in the region.

Kamloops-Thompson-Cariboo NDP president Ruth Fane even went so far as to mock Harper for being a "senseless cheerleader for Israel," and for not calling for the creation of a "multinational peacekeeping force."

There's a reason the New Democrats have never and will never gain power in Canada, short of a bloody revolution - and complaining about Canada's decision to stand with a country under siege from a group deemed by Ottawa to be a terrorist organization is at the top of the lengthy list.

If Harper is a "senseless cheerleader for Israel," then hand me some crazy pills and toss me some pom poms.

The NDP and other apologists for terrorist fascists like Hezbollah and Hamas have pointed to the awful death toll that the Israel bombing runs on Lebanon have wrought.

Entire apartment blocks have been levelled. Homes have been destroyed.

And in each are the bodies of Lebanese moms, dads and children.

To call it tragic is an understatement. But to lay the blame on Israel is wrong.

Nowhere in the NDP's couched condemnation of Israel is a call for Hezbollah's anti-Semitic leader, Hassan Nasrallah, to stop committing war crimes by using the Lebanese population as cover for his group's missile barrage into northern Israel.

Nor do I recall Jack Layton and the gang calling for a ceasefire as Hezbollah lobbed rockets into Israel during the past six years, after Israel had withdrawn from Lebanon.

And I cannot seem to find the press release from the left that demanded that Hezbollah terrorists release the two Israeli soldiers abducted on Israel soil.

In fact, it was this act that precipitated this latest round of misery in the Middle East.

Many, including the New Democrats, have attacked Harper for describing Israel's response to the abductions as "measured."

Perhaps in the opinion of members and supporters of Hezbollah, Hamas and al-Qaeda - organizations that brainwash followers to embrace death, yet whose leaders curiously fight like hell to stay alive - Israel's massive response to the abduction of two soldiers and the wanton attacks on innocent civilians is odd.

Then again, for those of us who feel life is to be cherished, even if it's "only" two soldiers, or the hundreds of Israeli citizens killed randomly simply because they are Jewish, the response of Israel looks absolutely justified.

Each and every death of an innocent Lebanese is the fault of Hezbollah.

That the NDP, the Canadian Peace Alliance, the StopWar Coalition and like-minded groups cannot figure this out is disturbing.

Instead, we see "Canadians" marching in Vancouver, Toronto and Montreal, waving Hezbollah flags and demanding that Israel be punished for "war crimes."

If Hezbollah is officially a terrorist group, and outlawed in Canada, why can't we ban lunatics from soiling our streets with such putrid nonsense?

Even the CBC has done a good job of showing the anguish Israeli citizens feel for the deaths of innocent Lebanese.

Reporter Adrienne Arsenault, formerly of Vancouver, has done a first-rate job showing us that residents of Tel Aviv care deeply for Lebanese victims.

The terrorist group invited this carnage. When will the Lebanese demand its ouster?

Yes, Harper has taken a "pro-Israeli" stance on this issue.

And for that, Canada - even Hezbollah apologists like our local NDP crew - should be thankful.

more fake news for you soft headed types who believe everything Hisbullah manufactures for your manic consumption.

When you figure out you have been suckered, and badly, you can start to see what is really going on in the world.

Are these all separate anonymice, or all they all the same person?

You've got some devoted trolls, BCL.

Weird, isn't it, TiGuy? Most of the people who vist my blog hate my fucking guts.

That's because you kick ass and always seem so cheery.

That drives them nuts.

The Israeli and Lebanese governments are talking past each other.

Israel has been clear: it wants an army of peacekeepers stationed in southern Lebanon and on the borders, which has the will and the muscle to disarm Hezbollah, interdict new armaments flowing from Syria and Iran, and stop the missiles raining down on Israel. The kidnapped soldiers must be released. In its view, UNIFIL does not fit the two requirements: its mandate lacks the will and its armaments are inadequate for the purpose. Until these requirements are met, Israel will widen its thrust into Lebanon, seeking to kill as many Hezbollah as it can while doing so.

The Lebanese government desperately does not want to be forced to disarm Hezbollah, nor can its army do so. So it wants peace so that the Israeli army will withdraw, Hezbollah will join the army (or not), the country can rebuild, Hezbollah can claim victory, and fighting will start again, soon, no doubt with more missiles raining down on Israel.

Bush wants to make sure the vacuum left by a disengaging Israeli army is not filled by a resurgent Hezbollah. For a while, he managed to swing France over to his view, but now France is wavering and moving towards the Lebanese government's views.

When and how will it end? When the NATO countries decide to put a credible force on the ground, with the mandate to demilitarize southern Lebanon. Until then, the fighting will go on, because Hezbollah has no option, having started the war, to continue fighting.