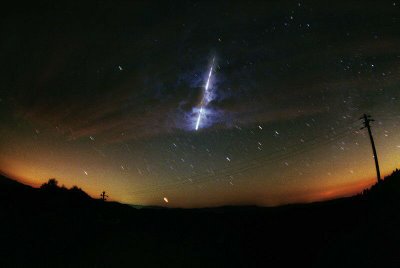 As comet Swift-Tuttle makes her lonely journey around the sun every 133 years, pebbles and tiny flecks of dust are blown from her surface by the solar wind. These bits of debris become the annual Perseid meteor shower, which runs from about the 8th of August to the 14th.

My birthday falls right in the middle of the storm, and I've always tried to work a few hours of star-watching into my annual celebration. Unfortunately, the last couple of years I've been stuck in the city, where the night sky is so lit up by office-towers that all but the brightest meteors are obscured. I don't know when I'll get a chance to see them again in their full glory.

Probably my favorite memory of the Perseids is from about seven or eight years ago, when I was camping with some friends on crown land on a little lake outside of Peterborough. It had been a dry year and there was a fire-ban going. So with no fire everybody's attention turned to the lake and the clear night sky.

A buddy, John, and I took a six-pack and a paddle boat and paddled out about half a mile to get a better view.

It was a terrific storm that year, with three or four meteors per minute. And every ten minutes or so, the whole world would light up and a bright silver line would draw itself across the sky. Occasionally, with the largest meteors, you could hear a sizzling noise made by the air they had burned in their passage.

And John owned a big German Sheppard named Maxi. When we'd first went off in the boat he had been barking frantically, and this had continued for some time as we pulled away from shore. For the last little while, however, Maxi had fallen silent.

So I was sitting there, enjoying the show, and I glanced out at the lake and saw this huge HEAD in the water about three feet away. I nearly lost bowel control for a second. I thought I was looking at some kind of lake monster.

But then of course Maxi heaved his front paws over the side of the boat and pulled himself aboard. Then he gave himself a wild shake, stuck his head between the seats, and started licking John's face.

That went on for a couple of minutes and, when Maxi had finally calmed down, the three of us went back to watching the stars.

Note: The New Scientist has some good advice for storm watchers:

The paths of the meteors all point back towards a single point in the constellation Perseus, which gives the yearly display its name. But they can appear anywhere in the sky, so the best strategy is to lie down and stare at as large a patch of sky as possible.

This year, the shower occurs just a few days after Full Moon, which will make meteor spotting more difficult. But you can minimize the problem by watching from somewhere where the Moon is blocked by a tree or a building.

If you go out tonight, have fun.

What about UFO's, BCL? The incidents of those over Gatineau Québec have increased dramatically over the last week.

...apropos of nothing, why aren't you covering the Festival des Montgolfières taking place in Gatineau, Québec over the last week?