He already flirted with the notion in the inaugural sermon of his pontificate, saying:

"We are not the accidental product, without meaning, of evolution."

This week, at the 2006 meeting of the Pope's SchÃ¼lerkreis - a group consisting mainly of his former doctoral students, that has been gathering annually since the late 1970s--discussion will concentrate on "the topic of creation".

According to the Guardian Unlimited:

There have been growing signs the Pope is considering aligning his church more closely with the theory of "intelligent design" taught in some US states. Advocates of the theory argue that some features of the universe and nature are so complex that they must have been designed by a higher intelligence. Critics say it is a disguise for creationism.

Crappy news if true. I guess that means my Flyingspaghettii Monster t-shirt comes out of storage. It looks like I'll be wearing it alot this winter. 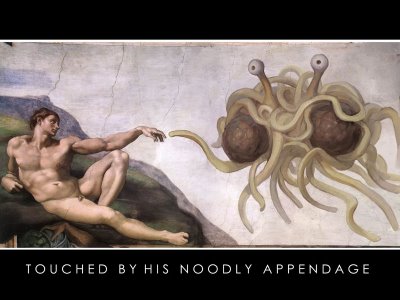 Posted by bigcitylib at 2:45 PM

This would be a huge step backwards since The previous Pope said:

"Today, almost half a century after publication of the encyclical, new knowledge has led to the recognition of the theory of evolution as more than a hypothesis. It is indeed remarkable that this theory has been progressively accepted by researchers, following a series of discoveries in various fields of knowledge. The convergence, neither sought nor fabricated, of the results of work that was conducted independently is in itself a significant argument in favor of the theory"

He also recognized that science and Scripture sometimes have “apparent contradictions,” but said that when this is the case, a “solution” must be found because “truth cannot contradict truth.” The Pope pointed to the Church’s coming to terms with Galileo’s discoveries concerning the nature of the solar system as an example of how science might inspire the Church to seek a new and “correct interpretation of the inspired word.”

"The Pope pointed to the Church’s coming to terms with Galileo’s discoveries concerning the nature of the solar system as an example of how science might inspire the Church to seek a new and “correct interpretation of the inspired word.”"

I think many people have come to their own interpretation, and it being along the lines of indifference to an ancient historical text they care no more about than Plato or Chaucer.

What I want to know, and what I think is really the meat of the matter...

Will his Noodley highness accept the Pope?