Yesterday, Jason Cherniak might have got Bourqued!* In the midst of a post offering "Constructive Criticism" of Stephane Dion and his Liberal team, Jason suggested that Michael Ignatieff should "stop asking the PM questions" during question period. Whether this is good advice or not is beside the point (I disagree with it, but won't argue that here). Suddenly, however, comments were appearing on this blog and elsewhere to the effect that Jason had ignited a Liberal Civil War! Even better, a headline appeared on Bourque's Newswatch: DION BACKER [ie. Cherniak], RIDING PREZ CALLS FOR IGGY QUESTION BAN!

Since Bourque is best known for selling headlines, the news value of his site is dubious at best. In fact, the only interesting thing to ask about this particular header is: did someone pay for it, and if so who, and (most importantly) if so, for how much? 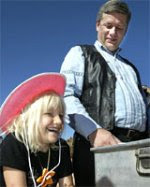 Because if you can't beat him, why not join him? I'd pay money to have selected headlines appear on Bourque's Newswatch. How about something like "Harper Enters Third Trimester".
* Bourqued: to be the subject of a bought, usually negative headline on Pierre Bourque's website

Shooting the messenger now. Next thing you'll be accusing Bourque of writing Cherniak's blog. You've just given the story new life, you must be in Harper's pay?

BTW, I didn't pay BCL for linking to my comment "Liberal Civil War" of yesterday.

Jason was just the messenger. It is Dion's people who are pushing it. Last night we had a conference call between some past Ignatieff supporters and everyone has decided to stand by the integrity of MI and oppose any attempts to defame him.

Sure you did, anon. Did the space aliens call you afterwards?

Who is trying to defame Iggy, pray tell? Like BigCity I also don't think having Iggy not ask the PM questions in QP is the way to go, although I understand the impetus. However, Pierre's headline was (as usual) rather tourqued and did not reflect the actual advice Jason was giving at all. The cons are trying to make mountains out of moll hills, and as Liberals we shouldn't play along.

Anonymous said...
This comment has been removed by a blog administrator.
10:24 AM

Holy moly! Ignatieff people plotting, oh crap, they are back on the Koolaid. People like anonymous piss me off, plotting like that. Iggy is good at putting his own foot in his mouth. I'm really mad right now about something unrelated, but this isn't good news. I knew those Ignatieff people would start going back to their old ways. Do us a favour and leave the party if you won't be behind Dion.

Cherniak is terribly naive for a kid who finished law school. If you try to disgree with him he'll argue - which is his right.

But, in his immaturity and naivety, he's hurting Dion. He may be involved in politics from a supporters standpoint, but he certainly is not "seasoned" enough to know when to keep the big mouth shut.

He's feeding the conservatives. You can't blame Ignatieff or anyone else for Dion's problems. And, those who back up Dion are playing right into Harper's hands - Harper is manipulatin them.

I think all these anonymii are CPC operatives trying their hand at psy-ops. How do I know? Because they all seem so bad at it.

Kinsella and his Daisy cohorts are in tight with the Marissen and Dion cabal. Dion is probably just a puppet for Marissen.

Speaking of Kinsella. What's he smoking these days ? I read he took issue with what Eddie Goldenberg had to say about Kyoto. NOBODY is closer to Chretien than Goldenberg. I laughed like a crack addict when I read Kinsella insinuate that he knew more about Chretien's mindset than Eddie did. That kind of stupidity is priceless.