I used to think that governments used their Environmental portfolios as dumping grounds for their ambitious women (Rona Ambrose, Gale Norton), which I felt was unfair both to the women and the file involved. But then I saw what happened when Harper put a rabid line-backer in charge, and the wisdom of a "soft touch" became apparent. 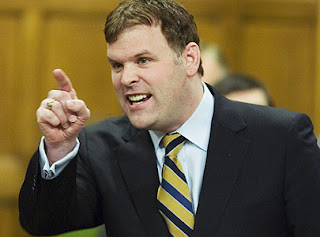 I'm wondering at what point does his hair turn green, his shirt rip off and his pants turn purple...