From WorldNetDaily, pithy quotes from the Chuckster, who recently embraced Christianity after 66 years of really rockin' Sin:
“In an evolutionary, self-centered world, in which man is nothing more than a glorified ape aimlessly shooting for stars of deification, it's not difficult to understand how the slippery slope of human degradation has led from fetal devaluing to discarding.

Norris went on to say that there is no theory of evolution, only those animals that Chuck Norris allows to live.

I believe human life is made in the image of God and as such has intrinsic value, worthy to save. And, as human beings, all zygotes are 'created equal, that they are endowed, by their Creator, with certain unalienable Rights, that among these are Life, Liberty, and the pursuit of Happiness.' (Preamble of the Declaration of Independence).

Chuck Norris then claimed that he would fight to his last round-house kick so that zygotes might keep their guns, flags, and SUVs. 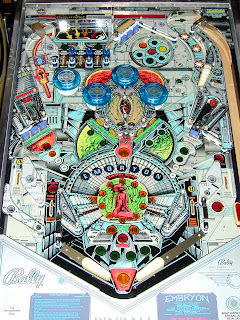 Before our embryonic twins were surgically placed into my wife Gena, the nurse told her, ''I want to show you something.'' She wheeled Gena to the incubator...and gently opened the door. The incubator was bathed in warm light and soft classical music. Gena later told me: ''It was like looking at something from heaven.''

Okay, I have to admit. That is pretty impressive.

Posted by bigcitylib at 7:43 AM

Not really interested in "more about Chuck Norris". He's a has been who was a cult character of a moment in time.

I think he got kicked in the head too much.