The Tories Are Like A Plate of Fried Veggies: Green On The Outside, Oily On The Inside 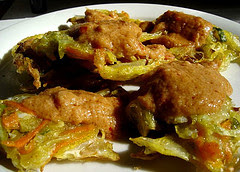 The Industrial/Commercial version of the Federal Energuide Program is called the Commercial Building Incentive Program (CBIP). It encourages:

...the design and construction of new, energy-efficient commercial, institutional and multi-unit residential buildings and facilities [...and...] provides design assistance and funding of up to $60,000 for eligible organizations based on building energy savings.

And of course, The Tories are letting the program die:

Last July, the CBIP program received funding for continued activities until March 31, 2007. On its web site, Natural Resources Canada said “a high volume of submissions” were received, resulting in the program being fully subscribed.

“The program is not accepting any new submissions for funding,” it said.

"A radical statement so early in the year. Even more stunning considering recent announcements," said [Royal Architectural Institute of Canada] President Vivian Manasc. "Canada's architects are disappointed. The built environment accounts for almost half of all greenhouse gas emissions. Considering that architects across Canada have between $40 to $50 billion worth of projects 'on the Boards,' and that buildings last for 50 to 100 years, the government's lack of real commitment is appalling. We think it is time they got serious and raised rather than eliminated incentives to increasing energy efficiency."

And people have the gall to question The Kyoto Protocol Implementation Act (C-288). As long as the Tories are in power, the only route to action will be through bills passed by the three opposition parties acting in concert. This one should be supported.

Posted by bigcitylib at 9:39 AM

A special interest group loses a subsidy, of course they're pissed and so what. Will they stop designing energy efficient buildings? Don't think so, not at $60 oil and $8 gas. Reminds me of the Liberal boondoggles from the 70s when contractors went around touting government grants to pump UFFI insulation into homes which later had to be ripped out when discovered it caused cancer.

Of course you'll say this until Harper decides to reinstate the program, and then you'll celebrate his green creds, won't you?

Unfortunately BCL you may be right about Harper. He is turning out to be a disappointment on a number of fronts. The only thing that may save him is that Stefi is proving to be the far left moonbat I suspected. If you clowns had picked Iggy you'd be up 10 points by now.

Harpor's first step in response to this policy:
-he has his thugs visit 'said' architect and readjust his furniture...
-flintstone Kenney rummages thru this programs file until he finds one project that was subsequently part of a flop house and calls a 'press conference' to deride wasteful and ineffective Liberal gov't program.
-Harpor and minions wait and watch focus group, watches latest poll.
-A month later, in front of a building that was redesigned 'green' through the Liberal program, pronounces a new program that supplies almost same $ but requires applicants to kowtow to great New Canadian Gov't and sign a secret oath to purchase copy of New Canadian Gov't's upcoming History of Hockey, Right-Wing version.

you too can find out what's really happening, not what Al Gore hopes will get him a Nobel

Go sell your oil company funded anti-climate change crazy someplace else. Everyone know who the nrsp really are ...

Some Inconvenient Truths about the latest IPCC report: For instance, it has quietly reduced its middle-range prediction of temperature rise in the coming century by more than one-third, and its mean sea-level rise prediction by more than one-half since the last IPCC report in 2001. Yet this was not a headline. It was warmer in Europe in the 13th century than the IPCC now predicts it will become by the 22nd. With that magnitude of downward revision, in a couple more reports they could be back to predicting global cooling.

Anon, I have actually written on this earlier.

While the mid ranges have come a down a bit, the lower ranges have come up a good deal, in the case of temperature from 1.4 to 1.8 degrees. Since the point at which you really start seeing ill effects is 2 degrees, it is much more likely this threshold will be exceeded according to the latest predictions. Furthermore, the mid-range under both earlier and later predictions is well above the point where you will start seeing really awful effects, so the fact that it has dropped a bit is irrelevant.

Finally, there are a number of upside dangers re sea level rise that are being kept 'off book" at the moment until the specifics of melting ice sheets are better understood.

All of which points up the absurdity of computer climate modeling: circular assumptions, conveniently changing baseline years, trends within trends all covered in the patina of 'science'.

Children, children. Our Great Fat Leader has proclaimed that global warming is a scientific fact. End of story.

...go back to bleating about gay marriage, or something.

And the Liberals are like a frog with a cork in it's butt; green on the outside, full of sh!t on the inside!