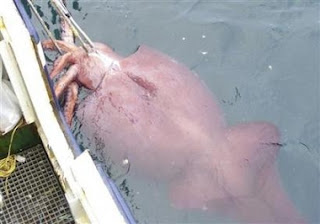 WELLINGTON, New Zealand - A fishing crew has caught a colossal squid [Mesonychoteuthis hamiltoni] that could weigh a half-ton and prove to be the biggest specimen ever landed, a fisheries official said Thursday. 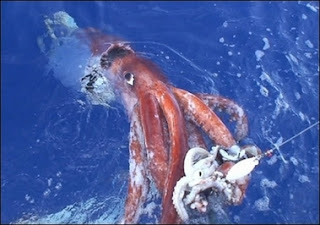 The squid, weighing an estimated 990 lbs and about 39 feet long, took two hours to land in Antarctic waters, New Zealand Fisheries Minister Jim Anderton said.
The fishermen were catching Patagonian toothfish, sold under the name Chilean sea bass, south of New Zealand "and the squid was eating a hooked toothfish when it was hauled from the deep," Anderton said.
And how much Calarami would this beastie make? 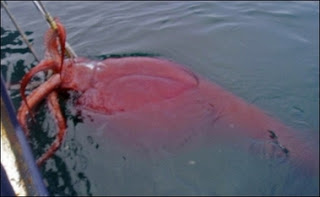 I can assure you that this is going to draw phenomenal interest. It is truly amazing," said Dr. Steve O'Shea, a squid expert at the Auckland University of Technology. If calamari rings were made from the squid they would be the size of tractor tires, he added.

That's fascinating. I've been waiting for decades for them to finally haul one of those out that looked remotely what they're supposed to look like. So far, most of the giant squid I've seen looked like...*warning* gratuitous CON-bashing ahead...Myron Thompson.

I read *somewhere* that the concentration of some chemical (urea?) in the flesh would make for very unappetising Calamari.

Now how about some pics of the 300 pound clownfish Al Gore trolling around Toronto with an entourage of gas belching Limos.

How about pictures of you, naked at the keyboard, chubby, cheetoh-stained fingers typing H-E-N-T-A-I into Google?

BCL'd would love you forever if you did that, you know.

Do You Think It’s Easy to Hail a Cab?”

$14,200 in hotel expenses in Montreal for Stéphane Dion’s chauffeur

$5,550 spent on hotel/hospitality during Kyoto Conference in Montreal
OTTAWA: Access to Information documents obtained by the Canadian Taxpayers Federation (CTF) reveal that Stéphane Dion’s chauffeur billed taxpayers $14,225 for Montreal hotel and travel expenses. In addition, documents show during the 2005 Kyoto conference in Montreal, Mr. Dion opted to lodge at a hotel at a cost of $5,548, even though he maintains a residence in Montreal where he is the Member of Parliament for Saint-Laurent–Cartierville.

For the period July 2004 to November 2005, records show Mr. Dion’s chauffeur billed $14,225 in 98 separate expenses for trips between Gatineau (the capital region) and Montreal. The expenses include transportation costs, meals, telephone charges, etc. Review the expenses by clicking here.

“Mr. Dion is quick to lecture Canadians on the need to cut greenhouse gases yet as environment minister he opted to drive to Montreal, keep his chauffeur in the city and bilk taxpayers $14,225,” stated CTF federal director John Williamson. “Canadians have had enough of politicians instructing us to change our driving habits when the same elites, like Mr. Dion, refuse to heed their own advice. Mr. Dion should practice what he preaches, take the Ottawa–Montreal train and hail a cab when in Montreal.”

“Under the Liberals, Canada’s greenhouse gas emissions drove upwards, while Mr. Dion was driven back and forth in a taxpayer-funded government car,” noted Williamson.

Hotels in Montreal? That is Mr. Dion’s Hometown –

Other documents report that during the first Meeting of the Parties to the Kyoto Protocol, held in Montreal from November 28 to December 9, 2005, Mr. Dion expensed another $5,548 for hotel and hospitality expenses. The hotel was over $300 per night and a $700 room service bill was picked up by taxpayers. Review the hotel bills by clicking here.


“Despite the fact that Mr. Dion lives in Montreal he opted to stay at a hotel,” concluded Mr. Williamson. “If Mr. Dion had the interest of taxpayers at heart, he would have slept in his own bed.”

Was it with righties? They use the words "hypocrisy" and "hypocrite" all the time, and they can't spell them.

apologies for the missing "e".

It's a function of the internet...and I can assure you that I won ALL of the spelling bees I entered when I was a kid.

Since you are no longer doing anything productive, you may wish to apply for a job as Dion's chauffeur...the salary is, well, I guess it's OK, but the side-benefits are stupendous...

But watch out for those emissions...remember...if you get the job, your boss's dog's name is "Kyoto"...

Another reason for turfing the Libs, as if one were needed:

"OTTAWA–Eddie Goldenberg, one of former prime minister Jean Chrétien's top aides, says the Liberals went ahead with the Kyoto Protocol on climate change even though they knew there was a good chance Canada wouldn't meet its goals for pollution reduction."

Committing the country to an international treaty without yourself believing in its attainability should be actionable. At the very least it should preclude them from power for the rest of this century.

I hope there is a video of that it will look good in the campaign.

Since you are no longer doing anything productive, you may wish to apply for a job as Dion's chauffeur...the salary is, well, I guess it's OK, but the side-benefits are stupendous...

Next time, identify yourself somewhere in your comment so I'll be sure to ignore you.