Coyotes On The Town

The coyote to the right was caught on video running loose in the middle of Chicago at 3:00 am on Monday morning. The police didn’t seem to know what it was doing there, but Brad Block, a supervisor for the Chicago Commission on Animal Care and Control told Chicago Breaking News that the coyote is let loose in the city to monitor the rodent population:

The animal has the run of the Loop to help deal with rats and mice. He said no one has called today to complain. “He’s not a threat…. He’s not going to pick up your children,” Block said. “His job is to deal with all of the nuisance problems, like mice, rats and rabbits.”

For the record, I have seen 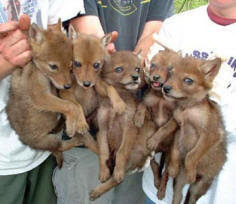 exactly one coyote within the City of T.O. (as well as a bunch running around small-town Arizona). It was trotting along some rail-tracks that run under Don Mills road, at about mid-day, as bold as you please. I've been told, though, that you can hear them howling at night near the Leslie Street Spit.

The picture at left demonstrates that they are at least as cute as any chihuahua of yours that they might eat. In any case, get used to them; they are almost impossible to eradicate in an urban setting.

PS. Note that in the clip our coyote is referred to as "the newest city employee". I hear Rob Ford is looking for cheap labour; this fellow works for rats.

Posted by bigcitylib at 6:18 AM

Email ThisBlogThis!Share to TwitterShare to FacebookShare to Pinterest
Labels: Coyotes