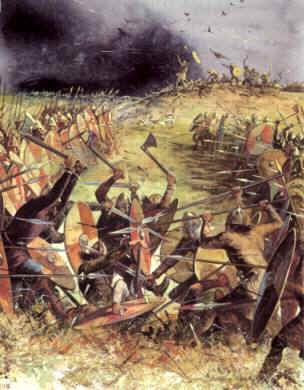 Sun TV News – Competitive mainstream national news service
The Commission approves an application by TVA Group Inc., on behalf of itself and Sun Media Corporation, partners in a general partnership to be constituted and to carry on business as Sun TV News General Partnership, for a broadcasting licence to operate Sun TV News, a national, English-language Category 2 specialty service that will be subject to the standard conditions of licence, expectations and encouragement for competitive mainstream national news services set out in Broadcasting Regulatory Policy 2009-562-1.

Now I get to use some of my Ezra Levant jokes! Hopefully, he doesn't get sacked or the whole thing go TU before I reach the 400 series. They're especially cutting.
So let the Culture Wars begin, and let them not end until the Canadian air-waves are cleansed of this Conservative Menace!

Is it going to be a "must carry" station or only on order?? I haven't seen anyone mention this.

Only on order. So, if you want to experience the buffoonery, it will cost you.

You're assuming that cable companies won't package SUNTV into their regular news packages, which include things like MSNBC, CNBC, etc.

They will, and most cable subscribers will end up getting it.

Although, I'm not terribly excited to see the emergence of tabloid neocon TV, I have a funny feeling that this network will be popular, if only because it will try to be entertaining.

Of course, the news as entertainment is a sick perversion of culture in our modern world, but even if you watch Fox News, disagreeing with every point, the truth is: they make it entertaining.

It's a side show, yes. But when you consider how much time we spend watching garbage like Jersey Shore in our society, is it any wonder why sideshow, tabloid news ends up the most popular.

I wouldn't count SUNTV out because of it's political positions. They don't matter to it's success.

You give Canadians too much credit if you think they're "above" this sort of crap. I have news for you: they're not.

I dunno about the leap to "most" cable subscribers will end up getting it, Mike:

what makes you think that "most" subscribe to the extra tier of news channels?

maybe I'm the exception cuz I'm just cheap, but I get CBC NN free as part of basic, & I'm good with that. But I'll bet a lot more add on sports & movie channels than they do cable news; "most" are NOT news junkies.

Plus, some satellite & cable co's may not even offer it at all, much less as a default part of a sub-package. Sun now has to negotiate with each one individually.

Well it will only go to people with digital cable or satellite, but Mike is right.

As with most channels out there, they'll get their subscriber fees regardless of whether anyone is watching or not.

Well, entertaining must mean different things to different people. I don't think fox is particularly entertaining. And, with SunTV...we all know who's going to be there: a bunch of talk jocks in their 50s, WK and Levant. Unless they suddenly become all way more entertaining TV then they've been, I don't see a huge draw.

And then there's Levant. Remember a guy named Morton Downey Jr.? Popular for a couple of years, but in the end they couldn't book anyone to guest on his show. He verbally abused them and kept touching their nuts. Levant will be like that, unless he can fake charming.

They will, and most cable subscribers will end up getting it
Given that Quebecor is Videotron and (at the moment) uses a lot of Rogers services (for mobile), I expect FNN to be force-fed down our gullets...