In Which I Break The Heart Of A Child 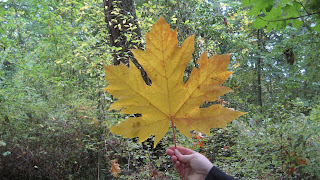 In fact, the width of Joseph's leaf (34.6 cm across) is so far off the accepted maple-leaf maximum size that I have to doubt Guinness really contacted him or his parents. I hope there isn't a scandal brewing.

And by-the-way, the pic above is an absolutely unexceptional specimen of a big-leaf maple maple-leaf. The wife and I collected it at on Vancouver Island several years ago. Note that its almost the same size as the ones these children (and I call them that only because I can't prove they're not children) are claiming as records. Such claims are not harmless; they sully the big-leaf maple brand.

There. That felt kind of good.

Young Joseph's leaf couldn't be a Bigleaf Maple because, as your link shows, they only grow in B.C. But not to worry, BCL as he appears to live close to you, maybe you could swipe his bike instead.

Quite. Which makes the boy's claim even less likely. And thanks, I've been considering the bike thing. Also finking him out to Guiness book.