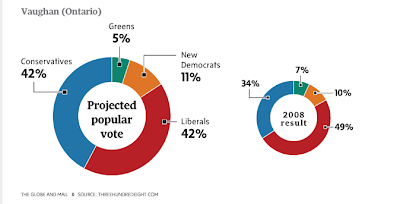 Haven't seen this graphic make the rounds too much. It's from here, from a couple of days ago. I mention it because, while listening to WK play at Cherry Cola's last night, one of his Lib insider buddies told me the poll was horsehit and Fantino would carry the seat based on the support of suburban Rob Ford types. Maybe. I thought, however, that Julian F. would be up by a mile in any published survey, and so I will interpret this one as good news.

As for SFH, they're not bad at all. WK sells them short a bit, I think. Also, he was playing a pretty violin shaped bass like the one McCartney used...you know, the cute Beatle. Also: nice t-shirts.

Posted by bigcitylib at 7:27 AM

I sometimes work in the riding of Vaughan. My impression is that the Cons really want this riding; the Liberals seem casual.

The people in the City of Vaughan elected former Liberal MP, Morizio Bevilaqua (sp?) as their mayor. I don't believe that the citizens of Vaughan are any more Conservative than other parts of Canada. The riding of Vaughan is suburban. There is a large population of Italian-Canadians. However, there are plenty of other groups of people living there. As with other suburban neighbourhoods, most people living there are probably concerned about personal economic issues.

Resigned seems like a better word. There are so many things that the Liberals could use to attack Harper. However, they seem to be holding back. The Liberals seem willing to take the punches, but not give them.

This isn't a "poll" of Vaughan, it's just 308.com's "projection" based on the past voting results, mixed in with the current regionals from recent polling from Ekos, Nanos, and the like. Think of it as the result you get from a rolling average, except Eric probably fudged with those numbers in Vaughan in Fantino's case, seeing as how the other two "projections" for Dauphin and Winnipeg North showed the same exact result with little movement between 2008 and now.

I wouldn't put a hilarious amount of credibility to it, for either party.

Just to point out.

Further to Volkov's point, I wrote about that projection methodology here:

I have a bet on with Éric about two of the ranges he has predicted. He's also off about the Liberals in Winnipeg North, and the Conservatives in the Dauphin seat.