While waiting for an GMU (George Mason University) to finish its official investigation, USA Today contacted several experts and asked them whether disputed material appearing in The Wegman Report, which is often cited by climate change deniers as a refutation of Mann's Paleoclimatic reconstructions, rose to the level of plagiarism. Their response was pretty blunt:

• "Actually fairly shocking," says Cornell physicist Paul Ginsparg by e-mail. "My own preliminary appraisal would be 'guilty as charged.' "

•"If I was a peer reviewer of this report and I was to observe the paragraphs they have taken, then I would be obligated to report them," says Garner of Virginia Tech, who heads a copying detection effort. "There are a lot of things in the report that rise to the level of inappropriate."

While the plagiarism does not negate some of the methodological criticisms of Mann's work make in the Wegman report (and first levelled by Steve McIntyre of Climate Audit), a more recent analysis by DC here suggests that even these criticisms were overstated.

PS. For background, I've written a number pieces on the Wegman controversy here. And take a glance below for an instance of the alleged plagiarism. 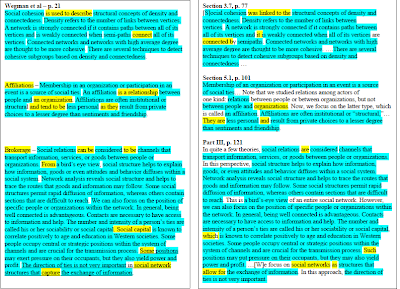 That's Wegman on the left, De Nooy, Mrvar and Batagelj on social networks on the right. Blue indicates direct lifts of D, M and B's work.

Posted by bigcitylib at 6:11 AM

The Wegman report was just one long smear made with minimal effort.

McIntyre is himself an expert at inappropriately expanding minor minutia into major issues. Statisticians are very good at doing that. Mann's work has been reproduced by many using both the same and different data sources, but you'll never hear McIntyre mentioning that.

Next people here will be saying the NAS report was a smear too.

If portions of the Wegman report contain plagiarism, let's hold those responsible responsible. At least no one is deleting e-mails or ignoring FOI request.

But in response to a request for Paul obviously missed this bit:

Separately in that response, Wegman said his "email was downloaded to my notebook computer and was erased from the GMU mail server," and he would not disclose any report communications or materials because the "work was done offsite," aside from one meeting with Spencer.

So why does that matter BCL?

You've raised no objections about climate scientists illegally ignoring FOI requests and their counselling the deletion of e-mails, so what has caused you to get religion now? Double standards anyone?

Deno is slow off the mark, as comment 3 here shows: