But How Were The Mens' Showers? 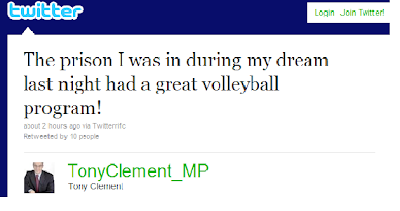 Did he bring his soap on a rope?

Interesting thing I've noticed about straight people - they can be men or women, left wing or right wing, even staunch feminists but the one thing they invariably have in common -

nothing's quite as funny as male rape.

Good lord. I knew Clement was a tool (from his days in the Harris clusterfsck) but not this much of a tool.

These people have got to go. The people of their ridings must be complete morans.

Why can't he be content to simply look stupid?

"The people of their ridings must be complete morans(sic)"

No, the voters of Muskoka consistently vote Lib, NDP and Green ...and 'Landslide Tony' keeps squeaking out wins of less than 1000 votes thanks to vote-splitting. All those G20 projects were bribes to keep his seat. If anything, Clement's riding is an example where the Libs & NDP should start co-operating and not run against each other in a few select seats. Clement is very vulnerable federally, and was also as an MPP during the Harris years.